Iris Out: Banksy’s “Exit Through The Gift Shop” 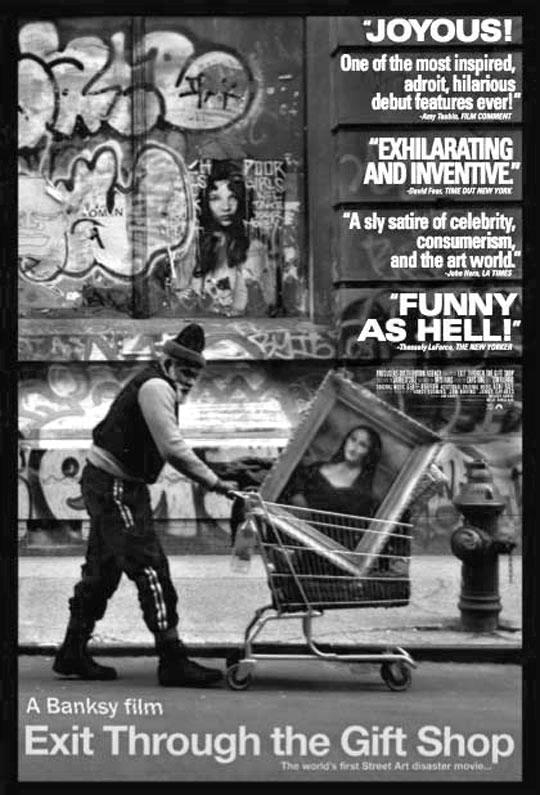 While perusing The A.V. Club’s top 15 films of the year, the screenshot from Banksy’s documentary-styled “Exit Through The Gift Shop” really grabbed my attention — say what you will about judging a piece of art by its cover.

The screen grab simply depicted a man wearing loose-fitting, paint-splattered athletic pants and a hoodie with the hood up, face completely blacked out. The words “Death Eater” quickly came to mind, but then I realized that his face was purposely blacked out to obscure his identity.

That man turned out to be Banksy, the notorious guerilla graffiti artist from the U.K. who never shows himself on film. Throughout the film, viewers only see his hands working or pixelated versions of his face.

A film by this secretive yet incredibly prolific graffiti artist should be enough to draw viewers in, but “Exit Through The Gift Shop” contains more layers: As Banksy explains at the beginning, the film began with the Los Angeles-via-France eccentric “filmmaker” Thierry Guetta.

A clothing store owner by day, Guetta explains that for a long time, he’s been compelled to film everything possible in his life — to the annoyance of his family and many others.

As the story goes, while visiting his family in France, the mustachioed eccentric Guetta discovered that his cousin was the well-known graffiti artist Space Invader. Invader is known for his small mosaic pieces depicting scenes from the Space Invaders video game.

Guetta had discovered his muse, per se, and soon enough, Invader introduced him to a host of other new-generation working graffiti artists, who all gradually accepted Guetta into their ranks. After all, most work created by these artists lasted only a few days, if that, so having Guetta film the installations seemed a way to preserve the art.

Guetta even managed to hook up with the ultra-secretive Banksy at some point, and after a series of shoots with him, Banksy accepted him as part of his small, trusted group under the condition that Guetta would use his normally unused footage to create a documentary about the street art movement. Unhappy with the result, Banksy created “Exit Through The Gift Shop” using much of Guetta’s footage.

As one of the main figures throughout the film, Guetta is enormously entertaining, especially in the last half hour of the film. The near-crazy impulse to film everything, the 18th-century facial hair and the charming lack of modesty combine to make Guetta a character worth studying.

As Banksy quips at the beginning, “I decided that he was more interesting than I was, so the film’s about him.”

Following Noel Murray’s lead in his A.V. Club review, I’m not going to go much further in depth because it’s much more entertaining if viewers remain uninformed of the still-puzzling twist near the end. In the last half hour, “Exit Through The Gift Shop” suddenly takes a turn for the implausible, calling into question the authenticity of Guetta’s character — though the footage of graffiti artists is certainly genuine.

Banksy’s penchant for large-scale pranks — distributing forged £10 n
otes at festivals with Princess Diana’s face instead of the Queen’s, for example — only adds to the confusion, and I still don’t know what to believe.

“Exit Through The Gift Shop” is invaluable as a document of the street art movement and the eventual commercialization by art collectors, but the film raises the question of how any artist becomes popular or famous.

Unfortunately, Banksy’s answer to that question seems to be that any artist, regardless of actual talent, can become famous and popular with the right marketing and media savvy.

Put simply, queue up your Netflix account and check out this strange little “documentary,” and then think about how artists actually become famous, and if that even means they’re good artists or not.