A season slipping away 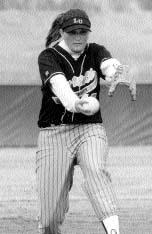 The Lawrence University softball team lost its first two games at the MWC tournament this past weekend during their opponents’ last at bat. The Vikings finished fourth at the four-team tournament.The Vikings played the second seed from the South Division, Monmouth, in the first round.

The Vikings fell behind early as Monmouth’s center fielder Jen Witmer hit a two run home run off of LU pitcher Amy Varda. The Scots led 2-0 after the first inning.

The Vikings took advantage of two Monmouth errors to gain one run back in the third inning, but they also left the bases loaded, something that would prove to be costly as the game continued.

The score remained 2-1 until the seventh inning. The Vikings utilized the speed of shortstop Jenny Burris and second baseman Shannon Arndt to score two runs.

Catcher Erica White was the next batter up, and she hit a long fly ball to center field. It was caught, but Arendt scored on the sacrifice fly, and the Vikings had jumped ahead 3-2.

The Vikings were in striking distance of more runs with Neal on third, but first baseman Ashley Stanton struck out and the game went to the bottom of the seventh with LU leading 3-2.

After Monmouth’s first batter flew out, the Vikings were only two outs from recording a win and advancing to the winner’s bracket. However, it was not to be.

The Scots next batter, Elizabeth Sunday singled to put the winning run at the plate. Nicole Auclair stepped up to the plate, having already scored one run on Widmer’s home run in the first inning. Auclair did not wait long, and drove a Varda pitch over the wall in left center field for a walk-off home run.

The Scots had defeated the Vikings 4-3.

The Vikings were shocked, and their confidence was bruised. They had to come back later that afternoon and play St. Norbert, who had lost 2-0 to Lake Forest, in the loser’s bracket, with the loser of the game being eliminated from the tournament.

The Vikings had swept the Green Knights in their two meetings this season. After the results of the first game, anything was possible in the second.

The Vikings jumped out early on the Green Knights again at the hands of Burris and Arendt. Burris singled, stole second, and scored on Arendt’s RBI double. She would score on a double by Stanton, and the Vikings had an early 2-0 lead.

In the field, the Vikings were on fire. In the top of the fourth, the Vikings added five more runs. The big hit in the inning was Neal’s double, scoring two runs. After three and a half innings the Vikings were ahead 7-0 and were comfortably headed for Saturday.

Then, the bottom dropped out, and the Vikings hopes slowly began to slip away.

The Green Knights began their comeback with two runs in the fourth. Gina Collar singled in both runs and the score was 7-2. St. Norbert added two more runs in the fifth, and then again two more in the sixth.

At this point LU coach Kim Tatro replaced Kost with Varda to finish the rest of the game. The runs did not stop however.

In the bottom of the seventh, they got the first two batters out and were only one out away. That last out proved to be the hardest to get, however.

After a walk by Lisa Immel, Collar came to the plate again. She doubled, knocking in her third run of the game, and tying the game at 7. Varda got Jess Peters to pop up, and the game went to extra innings.

The Vikings could only muster a Varda walk in the top of the eighth and returned to the field. Jess Thull led off for the Green Knights with a single, and the winning run was on first base. After a sacrifice bunt, Thull was on second with one out.

The next batter, Andrea Leystra singled up the middle, and the throw from Neal was not quick enough. The Green Knights had defeated the Vikings 8-7.

Monmouth eliminated the Green Knights the next morning and faced host Lake Forest in the championship game. The Foresters had no trouble, defeating Monmouth 8-0 in five innings, and advanced to the NCAA Tournament.

The Vikings ended their season with an 18-15 record. They will lose seniors Neal and White next season, but will still be a contender to repeat as North Division champions. The entire Viking infield returns, as do both pitchers.

All Vikings need to be a tough team is a quality catcher.