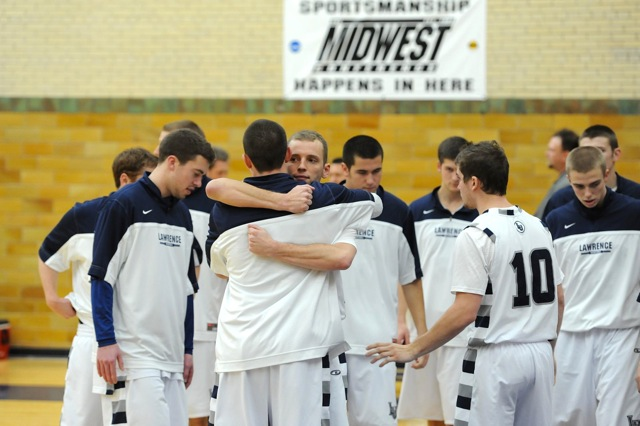 The Lawrence University men’s basketball team is a family. A living, growing and supportive family.

When it comes to basketball, so much emphasis can be placed upon the statistics — he scored this many points, he grabbed this many rebounds, he had this many assists. But if one were to define the Vikings by these statistics, he or she would face some staunch opposition from Head Coach Joel DePagter.

“[Stats] are not the things we focus on,” DePagter stated. “Nobody ever talks about how many points someone scored 10 years ago; they talk about the journey they had together and the experiences they went through.” It is with this far-reaching approach that DePagter views the individuals on his team.

Despite not focusing on the statistics, the Vikings have been pretty impressive. There is no doubt this family mentality has assisted the Vikings in their accomplishments. “When you have such close bonds and relationships,” remarked DePagter, “it keeps the focus on doing things together — like a family — and that has a powerful effect on a team’s success.” He adamantly emphasized that success comes from working together and building chemistry as a team. “When teammates and families truly love one another, that leads to great team chemistry… which is an absolute necessity to do the great things we’ve done here.”

With almost 40 past players showing up last weekend for alumni weekend, one can see that a family is hard to separate once it has been built. Constant communication with alumni and families of current players has helped to build a huge, supporting extended family outside of the Lawrence campus.

Remarking on the large number of former players that attended last weekend’s alumni games, Feb. 11, junior Conor Klusendorf stated, “I think that is incredibly special, and speaks volumes about just how much of a family we are.”

DePagter, who himself was a standout player with the Vikings from 1994-1998, noted that it’s fun to see some of his former teammates at these games: “I have so many special bonds with former players as I’ve played with many and coached so many of the guys.”

To DePagter, his role is much more about being a mentor than coaching. “A high percentage of the time when I talk with players it is about something other than basketball,” he stated. “I want the players to know they can count on me.” He realizes that a student athlete is exactly that: a student first, then an athlete. “Everybody has things and issues they will deal with off the court, and I am there for our players at any time.”

On and off the court, this family is tight-knit, and that support begins right from the first moment a player comes to Lawrence. Freshman Andrew Borresen noted, “The team is a family because of how close we are on and off the court…. We practically do everything together in season and out of season.”

Both the coach and the players will argue that this camaraderie translates directly to success. “Being tight off the floor definitely translates to a stronger basketball team because we are able to face adversity and support each other, as a family,” stated Borresen. “[Over the past few years] we’ve had a some great players, no doubt, but great players need great teammates and with great team chemistry to do great things.”

But are they really a family? Klusendorf answered that question in a way that one would probably not expect: “Many teams and organizations go on a Björklunden trip, but we always play board games into the morning hours. My freshman year, it was Mafia, the last two years, it was Loaded Questions.” They have a family game night — they are a true family.