John Harrison Hauser was denied a diploma due to his enlistment in the Union army.
Samantha Smith 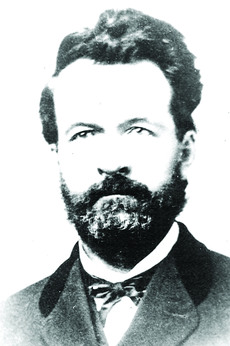 John Harrison Hauser was denied a diploma due to his enlistment in the Union army. (Archivists)

At the outbreak of the American Civil War, Lawrence’s 12th year of instruction was coming to a close. Throughout the north, various localities formed military units, and Appleton was no exception. These units were offered to the state, which presided over them before they were turned over to the federal authorities.
Henry Pomeroy, professor of mathematics and civil engineering, and Ernst Pletschke, an instructor of modern languages, both participated in the local organization of men. At an April 1861 public meeting held in the Lawrence Chapel in Main Hall, the men announced that they were entering the military service and wanted others to join them.
Pomeroy became a major in the First Wisconsin Cavalry, and eventually rose to the rank of lieutenant colonel. Pletschke gathered a company of men who called themselves the Appleton Light Infantry.
As captain, Pletschke drilled the men from late April to early July. The state did not readily accept his company because its quota was presently full. Disappointed, Pletschke moved to Missouri, joined the army there and died of malaria in October 1861.
With the gallant actions of Pomeroy and Pletschke it is easy to assume that Lawrence College openly supported the northern war effort and the contribution from faculty as well as students. However, there was one instance in which a student’s desire conflicted with the college’s administration.
In January 1905, John Harrison Hauser enclosed one dollar for the Alumni Record in a letter to President Samuel Plantz. The letter began with the statement, “I might have done something more for the old Alma Mater, if certain things had not occurred.”
The “things” to which Hauser referred were events evolving around his decision to join the Union army in February 1865. Displeased with Hauser’s choice, President Russell Mason held a meeting of the faculty where they determined that Hauser would not graduate.
The resolution was based on the idea that Hauser’s desire to enlist would spark a chain reaction amongst other male students and eventually Lawrence College would break apart. Hauser wrote, “They did not consider that if the Nation was lost, the University would not be of much consequence.”
Hauser remained adamant to enlist and Mason held a second meeting of the faculty where they concluded that he would graduate, but without candidacy for first honors.
One month before graduation, the colonel to whom Hauser reported received his examinations. 20 miles away, Hauser rode to his colonel’s headquarters without guard. The general on command threatened to reprimand him for passing alone in the presence of bushwhackers.
Mason wrote to Hauser and told him that he could receive second honors, although his marks justified him for first honors. Dissatisfied, Hauser replied and said that if he could not have what he deserved, than he wanted nothing.
The commencement program for that year stated that Hauser was not eligible for honors because he was at war. Just like Hauser said to Plantz in his letter, the dollar was well worth it.