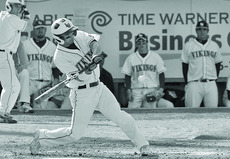 The Lawrence University baseball team finished up the season on a low note against St. Norbert last weekend, losing to their northern rivals in all four games played.
The Vikings started the weekend’s double doubleheader by traveling to De Pere on Saturday.
The first game at the Green Knights’ home field started poorly for Lawrence, with St. Norbert scoring four runs off of freshman Zach Owsley in the first inning. But the Vikings slowly fought back, tying the game 4-4 with two outs in the sixth inning.
The two teams traded blows until the eighth inning, when St. Norbert broke a 5-5 tie with a three-run, eighth-inning rally that Lawrence (7-29, 2-14 MWC) was unable to answer. Against divisionleading St. Norbert, an 8-5 road loss was a good sign for the home games later in the series, but that momentum would have to carry through the nightcap of the first doubleheader.
That nightcap started – and finished – badly for the Vikings, killing their momentum. After three scoreless innings, Lawrence put two runs on the board with a series of singles and RBI groundouts. St. Norbert responded, however, with 12 unanswered runs to send Lawrence back to Appleton after a 10-run loss.
The Vikings then closed out the season with two Sunday games against the Green Knights at Fox Cities Stadium.
Fox Cities Stadium provided a great atmosphere for both the players and the 312 fans in attendance.
Junior pitcher Andrew Wilt commented on playing in the Timber Rattlers’ stadium, saying, “It’s like you have made it to the big show. Running in from the bullpen in centerfield, there’s nothing better than that feeling.”
The fans also enjoyed the experience of watching their beloved Vikings in the stadium. “It was like watching the Brewers out there,” commented junior Colin Vize. “On some of the plays they made, I forgot that I wasn’t watching professionals.”
Unfortunately for the Vikings, the results were less impressive than the venue.
Lawrence’s offense started off the right way in the opening game at the stadium, scoring two runs in the bottom of the first inning off of back-to-back triples by junior Rob Rashid and freshman A.J. Nathan.
Rashid’s triple carried to the longest part of the field and just narrowly missed clearing the fence. Nathan then brought Rashid home with a triple of his own.
However, the Vikings’ efforts had been dwarfed by the six-run first inning for St. Norbert. The Vikings pitching staff would struggle through the early innings, giving up 15 runs in the first three innings.
The Vikings committed three errors in the game, but none of the errors were too costly, as all 15 runs were earned. Behind 15-2 with only three innings in the books, the Vikings pitching settled down, while the offense scored five runs in the sixth inning. The Vikings were unable to overcome the enormous deficit, however, and they lost 15-7.
In the nightcap, Lawrence hung in tough and appeared poised to finish the season on a high note. After falling behind 2-0, pitcher Luke Kostreva threw three consecutive scoreless innings. Over that stretch, the Vikings’ bats produced six runs to give them a four-run cushion.
St. Norbert (23-10, 13-3 MWC) cut into the Vikings’ lead, eventually tying the game 6-6 heading into the final inning. An error led to a go-ahead run for St. Norbert, who tacked on another run before the inning was over.
The Vikings were unable to respond in the bottom half of the ninth and lost 8-6. Andrew Wilt was charged with the loss, but in the process, Wilt broke the Lawrence University record for appearances in a season with 16.
Wilt, a junior with 33 career appearances, is on pace to break the career record of 41 appearances as well. He joins Rashid as Vikings who broke school records this year. Rashid, who set the Lawrence record with 32 stolen bases in a single season, finished the year in ninth place in the category in all of Division III.
The young Lawrence squad, which graduates only Kostreva, Andy Frelich, Nick Pedretti and Wes Otte, can expect to improve on this year’s record as the players gain experience. Coach Jason Anderson will add a strong recruiting class going into his third season at the helm, and it seems reasonable to say that the Vikings will be out of the Midwest Conference’s cellar in no time.