Only 34 days until the Telluride Bluegrass Festival, but who’s counting? 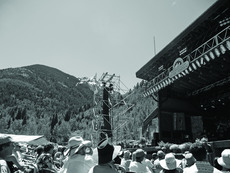 Colorado’s Telluride Bluegrass Festival is one of the most anticipated bluegrass festivals of the year, as musicians from all over the country gather in the rugged San Juan Mountains for four days of continuous music and festival tradition. While it is still a bluegrass festival, Telluride attracts a wide range of musicians each summer.
This year’s lineup includes the usual highlights of banjo star Béla Fleck, Edgar Meyer, Sam Bush, Jerry Douglass and Chris Thile and the Punch Brothers, along with artists like Brandi Carlile, Josh Ritter, Keller Williams and many more.
Part of what makes the festival so unique is the sense of community that has grown among returning festival-goers and musicians. As Fleck commented in an interview on the Planet Bluegrass website, “I feel like I grew up with the festival. It’s like a big family that welcomed me in.”
The bluegrass community certainly cultivates relationships both on and off the stage. For the past few years, I’ve been lucky enough to experience the festival from backstage and have become friends with many of the musicians.
As a classical musician, what I find the most endearing about the festival is the way the larger community of musicians gathers year after year to play together both on and off stage. In fact, some of the most amazing music I’ve witnessed at the festival takes place off the stage.
The bluegrass community is also extremely friendly and open to newcomers. Older musicians are more than willing to play with beginners, which creates a very welcoming atmosphere for newcomers. In the classical music world, there is a distinct division between beginners and professionals, but in the bluegrass community, the older professionals really try to teach young musicians the ropes.
Case in point: last summer I found myself in a room with some of the best bluegrass musicians in the world, including Fleck, Meyer, Thile, Paul Kowert, Chris Eldridge and many of the younger bluegrass musicians. Someone handed me a violin, and I tried to explain that I didn’t really know how to improvise, but no one seemed to care.
The bluegrass community encourages beginners to play with experts, and even world famous musicians are more than willing to work with the next generation of musicians.
This summer, after growing up attending the festival, Sarah Jarosz will make her debut performing on the main stage joined by Sam Grisman and Alex Hargreaves.
Telluride takes place June 17-20 in beautiful Colorado, but if you can’t make it to the festival itself, many of the leading bluegrass musicians are releasing new albums in the upcoming months. Look for Crooked Still’s new album “Some Strange Country” in stores May 18.
Chris Thile and the Punch Brothers are also releasing “Antifogmatic,” their first album since Thile’s classical bluegrass quintet “The Blind Leaving the Blind” on June 15, just in time for Telluride.
As I write this, there are only 37 days until Telluride, but who’s counting?