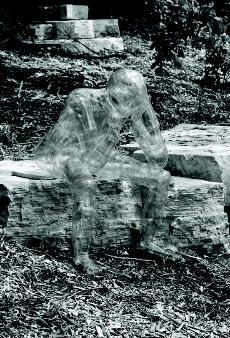 Just prior to the opening of the riverwalk Friday May 7, sophomore Eli Hungerford installed a sculpture of a figure along the path. Constructed from green PET bottles and resembling a man sitting in contemplation, Hungerford’s figure sculpture was admired by attendees of the official opening of the riverwalk. President Beck, faculty, staff, students and local media were all drawn to the sculpture.

Beck said, “When I first saw the ‘green thinker’ sculpture, I was delighted and impressed with the concept and the execution – the double recycling of Rodin’s ‘Thinker’ and of the materials from which the piece was made. It was the highlight for me at the opening of the riverwalk last Friday.”

Continued Beck, “When I spoke with the student artist, it was also impressive that he is only in his second year at Lawrence. He mentioned how much time it had taken him to create the piece from the shapes and material of the bottles.”

Hungerford, who majors in environmental science, spent six weeks on the sculpture as a project for an independent study with Associate Professor of Art Rob Neilson titled “Sustainable Sculpture.” To create the figure, Hungerford collected PET bottles from recycling bins around campus and picked up a number of two-liter bottles from a local community member who had posted them on craigslist.org.

The artist wanted to create a work that was open for interpretation, but his choice of plastic as a medium was inspired by Assistant Professor of Chemistry Kim Dickson’s course, Green Chemistry.

“Plastics, polymers and chemicals are found all over the world, and there’s no place that has remained uncontaminated,” said Hungerford. “I wanted to use plastic to show that emotion of how we’ve contaminated everything.”

Over the weekend, the sculpture was destroyed. It is unlikely that the vandal or vandals will be found due to the location of the figure. This is the second of Hungerford’s pieces to be destroyed.

President Beck commented, “I brought a guest to the riverwalk on Sunday, in part to show off this art work. It was shocking to see its destruction. We do not know who is responsible for this vandalism, but we can label it. It was deplorable, mindless, reprehensible.”

Incidents of vandalism against student art have been commonplace in recent years. This year alone, several works by students have been vandalized in Memorial Hall and in the Wriston Art Center, as well as on Main Hall Green, Hurvis Crossing and elsewhere.

Sophomore Annie Craddock, another student whose art has been vandalized, said, “It happens a lot more than people would think and for reasons most art students don’t understand.”

“Sadly, this not the first time a student art project has been vandalized, and again I’m at a complete loss to comprehend the mindlessness of this sort of callous act,” said Rob Neilson, who advised Hungerford on his project.

He added, “This work of art is a part of his course work and this senseless destruction is akin to someone obliterating a fellow student’s term paper.”

The Lawrence University Honor Council released a statement Tuesday regarding this incident:

“The Honor Council is extremely disappointed by the recent destruction of a student’s sculpture along the riverwalk. We feel that this is a clear violation of the Lawrence University Honor Code: ‘No Lawrence student will unfairly advance his or her academic performance or, in any way, limit or impede the academic pursuits of another member of the Lawrence community.’ While it is easiest to identify those violations which involve unfair advancement, this is an appalling example of a student’s academic pursuit being limited by the actions of another.”

Hungerford expressed that the reactions and comments of those at the opening of the riverwalk before the incident “showed [him] how much the community can appreciate art.” He hopes to rebuild his sculpture.

Upon hearing of the vandalism, Beck said, “My hope for the riverwalk was that it would bring a place of peace to the campus, offering spots for quiet reflection when we have free moments… Art and nature are alike in this: They should be respected, protected and embraced.”