The site of the new residence hall, as seen from the Fox River. The new dorm will have steel supports all the way down to the bedrock ensuring that it will not slide into the river.
Jessie Augustyn 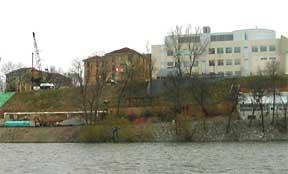 The site of the new residence hall, as seen from the Fox River. The new dorm will have steel supports all the way down to the bedrock ensuring that it will not slide into the river. (Jessie Augustyn)

Architecture is an integral part of the appearance of any campus, and here at Lawrence, it has been in the spotlight over the past year with the decisions to build a new dorm and student center.According to Bill Hodgkiss, the decisions of which architects to hire are based on several criteria: outside input from a hired firm, input from the Lawrence community, input from the contractor, and the choices of the senior management of the university at the time.

In 1995, Lawrence hired Sasaki Associates to be the outside firm. Sasaki is a campus planner that helps in the placement and design of new buildings. Sasaki is not responsible for the architecture, but can recommend an architect or firm to the school.

After Sasaki gives the university possible sites for new buildings, the designs are chosen. Science Hall is an example of this process. The architectural firm that designed the hall was hired after the university heard the opinions of the entire science faculty, said Hodgkiss. Some of the professors visited other science facilities across the country and found the architect they thought would work best for the Lawrence campus.

After the first choice for the site and design have been chosen, Lawrence hires an engineering firm to inspect the area and run a battery of tests that will show whether an area is safe to build on. STS Consulting, a company out of Green Bay, and Omni are working on the new dorm.

During this process, the contractor then decides what problems would arise from the structure selected and, in many cases, answers other general concerns about hiring a firm that is unfamiliar to Lawrence.

Oscar Boldt has been hired for Lawrence’s major construction projects in the past and will work on the new dorm. Hodgkiss believes Boldt will work well for the new buildings because of their ability to come back to campus if the need arises and their past record with Lawrence. “[Boldt] has an excellent reputation with us,” commented Hodgkiss, and added, “the analysis that I did when I first came on board here was that we were substantially.in some cases, below what it might have cost us in a general sense.The numbers were very favorable.”

In the past, there have been some problems with the buildings on campus. For example, there are cracks in the walls of Briggs Hall and last year during heavy rains, New Science Hall flooded. Hodgkiss says neither problem was caused by structural flaws. He attributes the cracks in Briggs to “simply a matter of settling” and the flooding in New Science to a faulty seal on the windows. Harold Ginke of Physical Plant believes that clogged rain gutters caused water to flow under the doors, contributing to the problem.

As for rumors of Briggs or the new dorm falling into the river, Hodgkiss says that in addition to the site being tested and found capable of supporting the structures, all buildings along the river are built into the hill with reinforced steal beams. He also noted that the ground underneath the buildings is secure bedrock and that, “[while] we’ve heard for years the rec center is moving,” it is not true.