Sophomore Jai Arora and Senior Tom Lipari were the only Lawrence players to win a match against 16th ranked Coe College.
Andy York 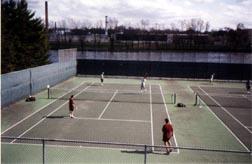 Sophomore Jai Arora and Senior Tom Lipari were the only Lawrence players to win a match against 16th ranked Coe College. (Andy York)

The Viking men’s tennis team had two tough matches against Iowan opponents this weekend and did not fair as well as they would have liked. On Friday, the Vikings took on Coe College, ranked sixteenth in the nation. Coe showed why it was ranked so high by defeating the Vikings 7-0. The doubles combination of Jai Arora and Tom Lipari was the only match winner for Lawrence.Saturday morning, the Vikings hosted Grinnell College. The Pioneers are one of the better teams in the South Division of the MWC, and it showed. The Vikings could only muster a single point, losing to Grinnell 6-1. Freshman Nick Beyler scored the only point for LU by winning his singles match. Beyler teamed up with Brian Hilgeman to win their doubles match as well.

The Vikings will host two MWC foes on Saturday. At ten, they will play Carroll, and at noon, they will face Beloit.

This past Saturday, the Lawrence track teams competed at the Carthage College Invitational. Both the men’s team and women’s teams fared well. The women finished fifth out of fourteen teams, while the men finished sixth out of fifteen teams.

The women had one individual winner. Sarah Slivinski finished first in the heptathlon with 3,855 points, nearly seventy more then the runner-up, Tina Moran of Carthage. Many other LU women placed in several events. Shelly Ebert continued her good season by finishing fourth in the 1500 meter run. Lisa Tranel finished fifth in the 3000-meter steeplechase, and Jesse Moser finished sixth in the 200-meter run.

The men’s team had their best meet of the season this past weekend. The men again did not have any individual winners but had many high finishers who scored multiple points for the team. LU was led by Don Smith, who finished second in the 400 meter run.

The Vikings had two fourth-place finishers, Eric Davis in the 3000 meter steeplechase and Sam Buckett in the decathlon. The men also had four fifth-place finishers: Aaron Guigar in the pole vault, Steve Geisthardt in the 400 meter hurdles, Ken Leising in the triple jump, and Smith in the 200 meter run.

This Saturday, the Viking track team will host their sole home meet of the season, the Wisconsin Private College Championships.

The Lawrence University softball team split a pair of games last Saturday, losing the first to UW-Oshkosh 5-4 and winning the second against M.S.O.E. 7-4. They also swept a double header from Ripon last Tuesday, winning the first 4-3 and the second 3-0.

In the Vikings game against UW-Oshkosh, errors were costly again as they have been all season. The Vikings made three errors in the game, costing themselves two runs. Titan designated hitter Jenny Oken knocked in the last of two runs in the bottom of the sixth inning to put them ahead for good.

In the second game, the Vikings jumped out with four runs in the first inning. The Vikings were led by third baseman Melissa Batog, who went 2-3 with two RBI’s. First baseman Ashley Stanton also went 2-3 with an RBI for LU. Lauren Kost picked up the victory and went 2-4 with an RBI.

In the Vikings’ first game against Ripon, they jumped in front early again. The Vikings scored three runs in the first inning, aided by first baseman Ashley Stanton’s two-run double. The Vikings added another run in the fourth and then withstood a charge by the Redhawks in the sixth but hung on for the victory 4-3. Amy Varda picked up the win for the Vikings, bringing her record to 6-8 for the season.

In the second game, it was all LU. The Vikings struck early, scoring two runs in the first inning. Kost shut down the Redhawks, allowing only six hits and striking out five batters. Shortstop Jenny Burris went 2-3 and Catcher Erica While went 2-4 to lead the Vikings to a 3-0 victory. The Vikings are now 17-13 overall on the season. They are 7-4 in the MWC, and only one win out of second place. The Vikings will host Beloit College for a doubleheader Saturday afternoon at home.

If Lawrence wins three out of their next four conference games, then they will qualify for the MWC tournament.

The Viking golf team competed at the Ripon College Invitational this past weekend, the first of three Ripon tournaments the Vikings will play in over the next two weeks. The team finished ninth out of twelve teams, with Carthage College winning the team title. One shining star for LU was freshman Jeff Henderson. Henderson finished first in the tournament, defeating Carthage’s Matt Wittrup by one stroke. Henderson shot 79 in the first round last Friday, and was behind by two shots going into the final round. Wittrup slipped up by shooting a 78 on Saturday, and Henderson took advantage by shooting a 75 and taking the title. The Vikings will be competing in the Ripon College Tournament Tuesday afternoon at Mascoutin Golf Club. This tournament will count for the scoring in the North Division of the Midwest Conference. The Vikings currently lead the North Division by 39 strokes.