Right through the fingers

Viking coach Korey Krueger looks in astonishment to his bench after another easy out at the hands of the St. Norbert defense.
Andy York 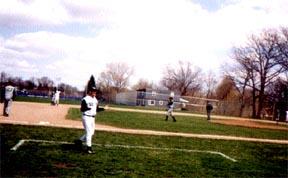 Viking coach Korey Krueger looks in astonishment to his bench after another easy out at the hands of the St. Norbert defense. (Andy York)

The Lawrence University baseball team lost three games to St. Norbert this weekend. A fourth game was postponed when a freak late-April snowstorm hit the Fox Valley. The three losses now put Lawrence at 2-5 in the Midwest Conference and in desperate need of some conference wins if they want to keep their hopes of making it to the MWC Tournament alive.In the first doubleheader held at Lawrence, the bats were missing for Lawrence. The Vikings could not seem to get a hit when they needed it. St. Norbert cruised to a 6-1 victory.

The second inning was the bad inning for the Vikings. Freshman pitcher Anthony Kouba got in trouble by walking three St. Norbert batters. All three batters scored, and by the time the Vikings got out of the inning, they were down 4-0. The Vikings could not seem to hit St. Norbert pitcher J.C. Reinke hard.

The Vikings put many men on base but did not seem able to score. Lawrence left nine men on base in the first game-an enormous number. The only Vikings player with more than one hit was second baseman Mike Hart who went 2-3 in the game. The Vikings scored one late run in the seventh inning, but it wasn’t nearly enough. The Green Knights defeated the Vikings 6-1 in game one of the doubleheader.

In the second game, the second inning was also bad for LU. St. Norbert scored two runs in the inning, but both were unearned. Third baseman R.J. Rosenthal made two crucial errors on ground balls in the second. With the bases loaded, St. Norbert left fielder Ben Arendt batted in two runs to give the Green Knights the lead. St. Norbert would hold this lead as Lawrence’s bats were missing for the second straight game.

Starting pitcher David Norgren shut down the Vikings, allowing only six hits and one run. The Vikings left another eight men on base in this game, making a total seventeen for the doubleheader. Again Hart was the only Viking with more than one hit in the game, going 2-4. He also had the lone RBI for LU in the late game.

The Vikings wasted an unbelievable pitching performance by right-hander Justin Anthony. Anthony went all nine innings giving up only three hits and three runs. Only one run was earned. Anthony tied a career high by striking out ten batters. He got no run support and picked up the loss falling to 1-3 on the season. This season, when Anthony starts for the Vikings, LU only averages 3.25 runs per game.

The Vikings hoped a night’s sleep would bring back their bats and a victory on Sunday. On Sunday, the teams were scheduled to play a double header at St. Norbert. However, Mother Nature got in the way. The Vikings and Green Knights played the first game, but a snowstorm forced the postponement of the second game.

In the first game, the Vikings did find their hitting. Unfortunately for them, their pitching disappeared. Both Lawrence and St. Norbert started with two runs in the first inning. LU scored one in the second, and St. Norbert scored two to take a 4-3 lead. Designated hitter Chris McGinley hit a solo homerun in the top of the third to tie the game at 4. However, that would be the closest the Vikings would be to the Green Knights.

St. Norbert has won 27 of their last 28 games against Lawrence.

The Vikings are now 2-5 in the MWC and are 11-12 overall. If the Vikings have any hopes left of making the MWC Tournament they need to win quickly. Both Ripon and St. Norbert have yet to lose a conference game, and will be tough to catch. The Vikings will play a doubleheader against Beloit on Saturday.