LETTERS TO THE EDITOR: Lawrentian editorial shows lack of sensitivity

Lawrentians were encouraged to respond to last week&s staff editorial on the Wall of Silence in the union. 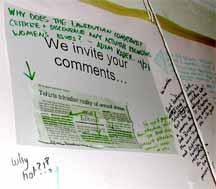 Lawrentians were encouraged to respond to last week&s staff editorial on the Wall of Silence in the union. (Quinn Lake)

Peer educator defends t-shirtsAs a survivor of rape and the peer education intern, I feel I must respond to your staff editorial that appeared in The Lawrentian last week. I was outraged as I read the staff editorial.

I want you to know that I am comforted by the fact that people are finally talking about rape and sexual abuse. The T-shirts around campus reflect the feelings survivors and friends of survivors have, which are real and need to be talked about.

If you are that offended, then don’t LOOK! You have the choice of not reading the shirts, of not looking at them, and of not going to the buildings. I didn’t choose to be raped, and I don’t have a choice to turn away from the memories, to turn off the fear, to stop seeing what happened. Being raped has changed my life and knowing.

As a peer educator, I am deeply troubled by your editorial. Last year, the editorial board wrote a very similar article. Have you forgotten the conversation between the peer educators and two members of your own board? Have you forgotten that LAWRENCE STUDENTS made all of the T-shirts? Do you know that people have told us how the shirts have affected their thoughts about sexual assault?

The T-shirts will continue to go up every year, and The Lawrentian will write offensive editorials every year, but in the end, our goal is reached. People are TALKING, they are listening, and the message about sexual assault is getting out.

I was absolutely insulted and enraged when I read the staff editorial “T-shirts trivialize reality of sexual abuse.” The article asked the question, “Who are these T-shirts for? Is it comforting for a rape victim to walk into the Union or Library and be accosted by some trivial, some bordering on vulgar slogans?” As a victim of years of continued sexual abuse throughout my childhood and a victim of attempted date rape, my answer is a strong YES.

These T-shirts are made by victims of sexual assaults, not by a group of tactless peer educators as the article so ignorantly implies. The article also asks whether or not putting sayings on T-shirts is an effective way to address the issue of sexual assault. Well, the simple fact that they gained enough attention for some anonymous staff editors to write about them says that they are indeed effective.

No one made the claim that these shirts will stop potential rapist and sexual assailants. However, these so-called “intrusive” shirts offer something priceless to sexual victims: the chance to express themselves and let others know that they are not alone. One might say that these shirts will fade from memory. Nevertheless, as a sexual assault victim, I remember every expression of strength from other victims because they help me heal a little more.

Here is my question for the obviously omniscient editors of The Lawrentian who claim to know the innermost feelings of all sexual victims on campus: Who are you to say that our creations are “demeaning” to us? My apologies if it is too hard for the anonymous writers of this article to deal with the thoughts and feelings that sexual assault victims live with every moment of their lives.