Pianist Richard Goode gives senior Andrew Cashner some helpful hints during a master class on April 9. During his visit to Lawrence, Goode gave three master classes and a concert for the Lawrence Artist Series.
Matt Jordan 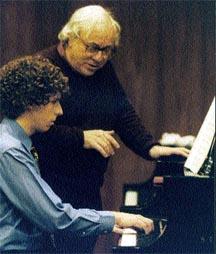 Pianist Richard Goode gives senior Andrew Cashner some helpful hints during a master class on April 9. During his visit to Lawrence, Goode gave three master classes and a concert for the Lawrence Artist Series. (Rick Peterson)

On Wednesday, April 10, Richard Goode drew a large crowd for his program in Lawrence’s Artist Series. A graduate of the Curtis Institute and student of Rudolph Serkin, Goode represents a time-honored tradition of serious, honest, and dedicated music making. His program that evening was very traditional, consisting of standard works by major composers. The first work on the program was the Sonata in F major, K. 533/474, one of Mozart’s lesser known piano works. One of the most difficult of all the Mozart sonatas technically, it is also one of the quirkiest and most problematic musically, lacking the immediate melodic appeal of some of its more famous siblings.

Mozart’s music has long been the despair of pianists, who either play it too straightforward, so that it lacks any elegance or character, or too self-consciously, as if they were attempting to “update” or “revolutionize” Mozart interpretation. Goode’s performance walked the treacherous tightrope beautifully and effortlessly, demonstrating an incredible ear for sound as well as a powerful musical intelligence.

The next item on the bill was four of Claude Debussy’s Preludes. One of the most influential composers of his time, Debussy realized whole new worlds of sound, which almost any other composer could scarcely have imagined. His two books of Preludes for piano were seminal, actually inventing a new language of piano music.

Here, Goode was simply miraculous, bestowing on Debussy’s music all the color and sensuousness that it requires, but with the same crystalline clarity of sound he had brought to the Mozart. The overall effect was sheer magic; it only left me regretting that he did not play an entire program of Debussy.

To conclude the first half, Goode played Beethoven, the composer he is most readily associated with. His recording of the complete sonatas, released in the mid-90s, set the standard for the modern approach to Beethoven playing. For this concert, he chose one of the most difficult sonatas—op. 81a in E-flat, known as Les Adieux, or “Farewell.”

My only negative observation of Goode’s playing is that it is so calculated and finely polished that it leaves very little room for spontaneity or inspiration. As a result, his performance of the Beethoven that evening sounded very much like his recording. That being said, it was nonetheless a brilliant performance, bringing an enthralling end to a marvelous first half.

The second half consisted of only one work: Schubert’s Sonata in A major, D. 959. Ranking among the greatest of all piano sonatas, it is a monumental work, lasting about forty-five minutes. The piano sang under his fingers, with a simplicity and elegance that goes right to the heart.

In the last movement, which is one of the greatest rondos ever composed, Goode’s performance was utterly charming, leaving a smile on every listener’s face. What better way to end a marvelous recital?