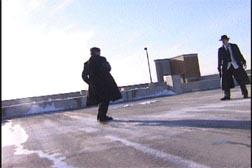 This Friday, April 26, the Winter Reflection LU Short Film Festival will be held in the Wriston Auditorium at 7:00 pm. The festival, which is being sponsored by Impact Films and Blue Bassoon Pictures, will feature eight short films ranging from three to seventeen minutes in length. Impact Films is an LUCC funded club which was founded by LU senior Alaric Rocha and LU grad Adam Enter with the “mission…to create professional films,” according to Rocha.

Readers may recall the presentation of several other Impact short films since the club’s formation in 1999, such as “Hellavator,” which won an award for “Best Special Effects” at the Ripon Film Festival on April 13.

In addition to the excellent lineup of short films, the Winter Reflection LU Short Film Festival will feature this year’s Ripon Film Festival “Best in Show” winner, “Peter ‘Smurffy’ Jantz—A Freestyle Walker.” This fifteen minute long film is described as “a mocumentary detailing the life of a person who desires to become a professional freestyle walker, but has to overcome his cross-eyedness and [lack of] depth perception…his struggle, and the people who support him” according to the festival’s program. “Smurffy” was written and directed by Ripon College student Sebastian Meade.

“Anxiety,” directed by UW Oshkosh student Andy Jensen, was also added to the lineup for this Friday as a late addition.

Beattie and Gerald Marsh will be taking the helm of Impact Films next year, as Rocha will be graduating this June. Impact will be renamed Mother Superior Audio/Visual. Rocha is optimistic about future leaders Beattie and Marsh: “I am confident that Phred and Gerald will do great things with the club after I’m gone.”

Rocha, Marsh, and Beattie hope that this film festival will encourage current and future filmmakers here at LU. “We want to show the LU community that LU students are enthusiastic and serious about the art of filmmaking. Ripon College’s film “Peter ‘Smurffy’ Jantz—A Freestyle Walker will be an example to the LU community that great filmmaking is happening around us, and that we shouldn’t get behind in this relatively new art form.

In the future, Impact Films wants to join forces between the colleges of this area and create a large film festival with prizes and cool guest speakers! We also hope that someday we would like to see a real film department here at Lawrence University.”

Rocha also stated that Impact will be asking for an increase in funding in order to purchase new tools to produce more “professional looking films.”

Future Impact/Blue Bassoon events for the rest of this term include the premiere of their first feature length film, Pandora’s Box, directed by Rocha, on May 18 at 8:00 p.m. in Wriston Auditorium. As a sort of farewell statement, Rocha related a dream of his for the future of LU filmmaking:

“I had a dream a few weeks ago that I went into hyper sleep here at LU. I woke up six years later and the students and Professors of LU in 2007 told me that my filmmaking club had become the most successful and famous college club in the world. I woke up crying. I think this dream can come true.” 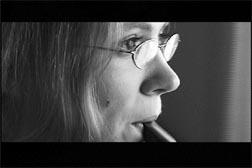 &Time Between Two Mirrors& Is based on Alan Lightman and attempts to &discover… through visual images only…what thoughts go through the mind of a musician, and what sacrifices one must make for art and success,& according to director and Impact president Alaric Rocha. (Alaric Rocha)