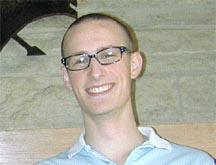 After winning the LUCC vice presidential race, Cene Ketcham had little to say about his victory. When asked what he wanted to convey to the student population about his vice presidency he said, “I just want Lawrence students to know that I will try to be as fair as I can.”As co-president and co-founder of both the classic film club and Students for Leftist Action, Ketcham is accustomed to positions of leadership.

While Ketcham admits he is slightly intimidated by the responsibilities that accompany the LUCC vice presidency, including his obligation to chair the finance committee, he says he is thrilled to be able to play a more proactive role in campus life.

Ketcham and president-elect Cole Delaney ran the election on a platform that emphasized “making LUCC more relevant to the everyday student.” Ketcham states that LUCC and the finance committee are doing wonderful jobs currently, but believes that visibility is a central problem to how the LUCC is being run.

In addition, Ketcham states that the finance committee and LUCC in general are too reactive in their presences. He believes that currently student groups are forced to approach LUCC in order to find out benefits that LUCC offers. Ketcham wants to bring LUCC to the student organizations by providing mailers regarding finances, and to promote more student involvement within the body itself.

When asked how he is preparing for his upcoming vice presidency, Ketcham jokingly replied, “Well, I’m going to the meetings more often.”

While Ketcham may not be preparing night and day for his upcoming position, he is confident in his abilities as future LUCC vice president, and one only has to look to the fact that Ketcham won the race by 62 percent of the vote to see that the Lawrence Community shares his confidence.