Vikings overcome sloppy starts to win back to back games

Senior guard Beth Pollnow had 11 points and 10 steals as she led the Vikings to a 61-47 victory over Lake Forest.
Andy York 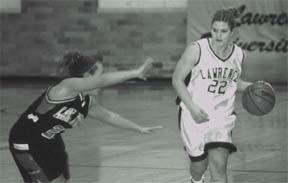 Senior guard Beth Pollnow had 11 points and 10 steals as she led the Vikings to a 61-47 victory over Lake Forest. (Dan Leers)

This past weekend the LU women’s basketball team defeated two Midwest Conference foes from Illinois: Knox and Lake Forest.On Friday night, the Vikings played host to the Knox Prairie Fire. From the opening tipoff, Lawrence was in control of this game.

The Vikings started with a 9-0 run capped by a layup by freshman guard/forward Felice Porrata. Knox finally scored their first points three minutes into the game. With 11:34 left in the first half, Lawrence had taken a 19-4 lead. The Viking’s foul trouble let Knox get back into the game as the Fire hit six of seven free throws in the first half to trim the score to 32-15 at halftime. The Prairie Fire’s struggles throughout the first half stemmed from their inability to beat the 2-3 zone defense the Vikings used.

Both teams began the second half in sloppy fashion, exchanging turnovers in the first few minutes. Knox finally came alive with roughly fifteen minutes left in the half, finding their offensive stride and holding back the Vikings on defense. Knox cut the LU lead to nine as Knox junior guard Sue Blafka hit a three pointer with twelve minutes left in the game.

After Blafka hit two free throws with three minutes to go in the game, Knox had cut the Lawrence lead to 52-45, but that would be as close as they got. The defense of LU senior guard Beth Pollnow, and the offense of Porrata, led the Vikings down the stretch as they shut down Knox, eventually coasting to a 61-47 victory.

LU was led in scoring by senior guard Dara Rakun, who had sixteen points. Porrata added eleven for the Vikings. The player of the game for Lawrence was senior Beth Pollnow. She added eleven points and ten steals, the highest takeaway total in the Midwest Conference this season.

“Coach said that this was a must win for us, and that the guards would have to play tight defense, and then everyone else would vibe off of us,” said Pollnow.

Against Lake Forest on Saturday, the Vikings again started off strong, taking a 25-18 lead into the locker room at halftime. The defense once more came up big down the stretch, as Pollnow added to her league leading steal totals with six more takeaways. Porrata led the Vikings in scoring with twenty-two points as Lawrence won 59-49.

The Vikings are now 7-7 on the year and have a 6-2 conference record, earning them a third place conference ranking behind league leader and undefeated Carroll College and second place Lake Forest College. The Vikings play Illinois College today and then its away at Knox on Saturday.