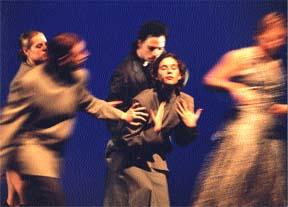 Friday, Wild Space Dance Company and their performance of “Fresh Tracks” will create an experience of “time, force, and motion that will stir your heart,” says theatre professor Timothy X. Troy.A Milwaukee-based troupe, Wild Space Dance Company has been a company in residence at Lawrence since Sept. 2000. Their presence aids in diversifying Lawrence’s theatre department and emphasizes their focus and dedication to exposing the audience to contemporary dance.

As part of Wild Space’s status as a company in residence, they stage one major performance each year. Although this year’s performance emphasizes a collaboration with Lawrence faculty (Timothy X. Troy and Dean Kathleen Murray) and Wild Space members, in other years Wild Space has enlisted the help of theatre students in constructing the set for their performances. Wild Space also conducts workshops for Lawrence’s acting classes throughout the year, led by artistic director Debra Loewen.

The bulk of Wild Space’s performances take place in Milwaukee, but they also perform a busy touring schedule throughout Wisconsin, emphasizing aspects of Wisconsin history in their “site-specific” road shows. Wild Space has also performed in New York City, Chicago, and Japan since their genesis in 1986.

Wild Space, which emphasizes the development of new movement styles and improvisational dance, is best known for its “site specific” themes. For example, Wild Space has performed in drained swimming pools, and this April they will perform an interactive show in the Milwaukee Art Museum.

Featuring an unusual collaboration with the live piano performance of Murray, Dean of the Conservatory, the Wild Space Dance Company’s performances are hallmarked by their incorporation of live music and theatrical dance. Dean Murray, who has appeared as a soloist and chamber musician in concerts throughout the Midwest, will perform Samuel Barber’s “Excursions” Op. 20 with Wild Space. Barber, a 20th century composer widely known for his deliberate and passionate “Adagio for Strings” reveals a different side through the multi-hued and famously challenging “Excursions,” which is inspired by American folk music and the blues.

In a premiere performance of the dance number “Excursions,” choreographed by artistic director Debra Loewen, Wild Space will interpret the many meanings of the word “excursion” with their bodies. The four movements of “Excursions” are not connected in an obvious storyline, but the different combinations of the troupe’s seven dancers create an imaginative rather than literal connection. The performance of “Excursions” is especially exciting for the Lawrence theatre department because it will soon become a permanent fixture in Wild Space’s repertoire and will appear in future performances in Milwaukee and on tour.

Friday’s show also features an art-interactive number, “Knowing the Answer,” in which the full company dances among set pieces by Wisconsin sculptor Jill Sebastian. Wild Space not only collaborates with their visual surrounding and with live music, but also with literary art. Last year’s performance at Lawrence, “Dancing Aloud,” drew its motivation from the works of contemporary authors.

Stansbury Theatre will definitely be graced with the “Fresh Tracks” of Wild Space’s short trips, adventures, and explorations drawn from Barber’s piano music and Troy’s libretto. A libretto in this case is not the sung word, as it would appear in opera, but a written framework and literary images for the choreographer to work with for a unique approach and treatment of the music. The piano-dance collaboration is especially unique since the vast majority of modern dance is done to recorded music rather than live musical performances.

The program also includes a solo number entitled “Tomorrow” and a surreal dream sequence called “Hand to Mouth,” a colorful theatrical interpretation including an encounter with Elvis and a game show entitled “What’s Your Lawsuit?”