“O Brother, where art thou?” a stand-out nominee 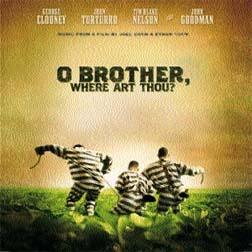 One album stands out quite plainly from its fellow nominees for best album this year. The soundtrack to the movie O Brother Where Art Thou? is remarkable both for being a soundtrack (and thus, like most soundtracks these days, being the work of several artists) and for being an album entirely of “old time-y” music, often performed by men who have been performing these songs since before there were Grammies to award. It may seem remarkable for a soundtrack—often the most bastardized of all album types—to be honored with such a nomination, but fortunately O Brother Where Art Thou? is no ordinary soundtrack. I realize that discussions of the quality of the movie are quite contentious, so I will withhold my own opinion, but suffice it to say that O Brother Where Art Thou? has—quite consciously, I think all will agree—a significant interaction with its soundtrack. The movie might well be the greatest music video ever made.

In any event, since the music was picked with more than usual care, the soundtrack becomes more of a concept album than a soundtrack. The songs, though by a variety of artists both young and old (Ralph Stanley could be Emmy Lou Harris’s grandfather), hang together quite well—even if you haven’t seen the movie. As a listener, you will find yourself stringing together songs like “I Am a Man of Constant Sorrow,” “Oh Death,” and “Angel Band” with their own implied stories. This is music that lends itself to the imagination in very concrete ways, as it seems to prod the listener to uncork a jug and begin to tell huge lies.

The more interesting aspect of this album and its nomination is that it is an album of real folk music—old time country, folk, and Delta blues—and this too, if you have faith in humanity, is not so remarkable. After all, we’ve had Billy Bragg and Wilco’s takes on Woody Guthrie, as well as successful adventures in real country music by the likes of Emmylou Harris (featured prominently on the soundtrack and in the movie), and any new album by Johnny Cash is guaranteed a Grammy nomination. We’ve even had the good fortune to have an artist like David Berman update the genre with four brilliant albums by his band the “Silver Jews.”

But on O Brother Where Art Thou? we find ourselves taken back to the originals. The very best songs on this album are sung by people like Ralph Stanley, who has been singing these songs for more than 50 years, and by Harry McClintock, who died almost 50 years ago. These are country musicians that the monster that the late Chet Atkins created in the late 60s—Nashville, Tennessee—never destroyed.

Now, I am sure nobody truly blames Atkins for the present state of popular country music—he couldn’t have known about Garth Brooks—but it is quite wretched. I am also sure that, despite what Dr. Pepper and 10-10-220 might think, everyone knows somewhere deep down that contemporary country music is garbage. Some people are just slow to realize this. Ultimately it is not surprising—if you’re an optimist like me—that O Brother Where Art Thou? has become as popular as it is (it’s gone platinum several times over). People were bound to realize that the originals are always worth remembering.

There’s not a great deal of critical commentary worth making about this album, and thus this album is easy to review. It’s like this: All the songs are great. Ralph Stanley’s “Oh Death” will give you goosebumps. “Don’t Leave Nobody But the Baby” by youngsters Emmylou Harris, Alison Krauss, and Gillian Welch is gorgeous. Etc.

But this is music that does not need to be reviewed. All the conventions of rock criticism are exposed as the self-serving creations of would-be literary critics (which is what we all are) by this music. I don’t wish to belabor the point, or suggest that we should take simplicity as dogma in popular music, but sometimes we should all recall the pleasure to be had in “old timey music.