Cole Delaney and Cene Ketchum, as pictured in The Lawrentian last year, follwing their election to President and Vice-President of LUCC.
Andrew Karre 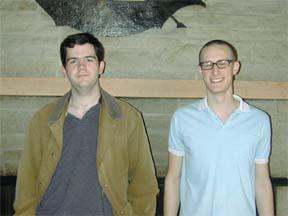 The third item on the ballot, a proposed change to Article Three of the LUCC constitution, passed by 88 percent. The amendment clarifies the process by which cabinet officers are appointed.

DeLaney was pleased with his victory and with the campaign, and looks forward to making significant changes to LUCC. “I want to reform LUCC from the top down,” said DeLaney in an interview shortly after he learned of his victory.

DeLaney was particularly interested in changing LUCC from a body that at present, he says, tends to sit back and wait for clubs and organizations to come to it.

“In the past, LUCC has been about ‘clubs and money’—a very reactive operation. That’s still going to be an important aspect, but I want to start looking out and being proactive about issues that we [LUCC] can actually change,” said DeLaney.

DeLaney says that, as always, funding will be the biggest issue before the council when his tenure begins third term. Pending legislation to overhaul the budgeting process [see “Shrode proposes changes to activity fee” on this page] will play a part in how his administration will proceed.

DeLaney and Ketcham were pleased that they were both elected. They had conceived of themselves as a ticket from the very beginning. DeLaney says that he only went ahead with his campaign after he was sure Ketcham would enter the race.

“The best possible student government would consist of a president and vice president who work seamlessly with each other. […] I’m not sure I would be here right now if I didn’t think that I would have somebody [in the vice-president’s chair who] I felt was competent and I could work with and we could get along and not have disputes,” said DeLaney.

Though it is not necessarily the president’s duty to do so, DeLaney plans to work closely with Ketcham and the finance committee. He says he will be less vocal than he was as a senator, but does plan to contribute his ideas.

DeLaney stressed the president’s role as primarily a manager, rather than a legislator, and that although he has a legislative agenda, he realizes that a large part of his job is to manage council meetings.

“The LUCC president could be called a chairman, in terms of his duties. His job is to run the meetings, set the agenda, and chair the committee on committees.”

Cene Ketcham could not be reached for comment at press time.