Lawrence UniversityÂ´s Andy Kazik controls Nick Jasurda of the University of Wisconsin-Oshkosh in the 184-pound championship match at the Lawrence Invitational on Dec. 1. Kazik pinned Jasurda in 3
Ryan Marx 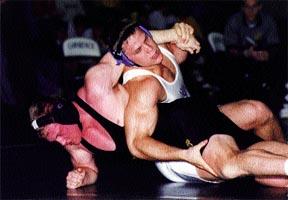 Lawrence UniversityÂ´s Andy Kazik controls Nick Jasurda of the University of Wisconsin-Oshkosh in the 184-pound championship match at the Lawrence Invitational on Dec. 1. Kazik pinned Jasurda in 3 (Public Affairs)

With a record of 25-0 only halfway through the season, senior wrestler Andy Kazik is poised to brand himself as one of the most prolific wrestlers in Lawrence history. Kazik, ranked first in the 184 pound weight class by the National Wrestling Coaches Poll, prefers to dismiss his history of success as unimportant.

“I don’t think I’m that good,” he says. “I’m confident in what I can do, but I don’t go out there expecting to win every time.”

Kazik has 114 wins in his Lawrence career, placing him second in school history to Mike Hoskins ’98, who had 135. Kazik also owns the second best season in school history (in wins and winning percentage) thanks to last year’s 41-4 season.

This season, Kazik has allowed his opponents points only by escape. That doesn’t really matter, though, since that’s the way he wins. Kazik prefers to let his opponents scrape themselves up off the mat because he cannot knock them down again if they don’t.

The numbers aren’t important to him. They don’t win matches. “I try not to think about going undefeated too much. People want me to say I’m the greatest, but I don’t think like that. I’m driven by my self-worth. Everyone counts on you to win. Coaches, players, family, and friends. It’s a matter of personal pride.”

To Kazik, winning the championship is everything.

“First comes winning nationals, then making All-American. Then I care about the stats,” he says. “I’d take a 31-6 season to be the champ every time.”

Kazik began wrestling in the third grade, though he does not have a clear recollection why.

“My older brother wrestled. I guess you always want to be like your older brother. It’s hard to say no to something you’ve known all your life.”

Not only is it hard to say no, but Kazik enjoys the team aspects of the sport, as well as the solidarity that wrestling offers.

“Playing with a team can help you a lot, but when you’re on the mat, it’s me versus him. I know if I lose it’s my own fault.”

Starting early certainly paid off. The DePere native spent four years on Appleton West High School’s varsity wrestling team. In that time, he made three state championship appearances, winning it all his junior year. Kazik failed to repeat as champion, and that defeat has haunted him ever since.

“I looked at the [scoreboard] between matches and saw that I was down. I thought, ‘That’s not right. I should be winning.’

“To this day, I don’t know who I lost to. He was one of those guys you look past. I should have been a two-time state champ.”

The sting of that loss is something Kazik still feels today. It’s his motivation to endure practice, or as he calls it: “two hours of hell, five days a week.”

Losing the state championship taught Kazik that nothing is guaranteed. “If you go out there thinking you’re better than the other guy, you’re going to get beat. You have to focus on the match at hand,” he emphatically stated, adding: “It’s an honor to have everyone expect you to win, but it bogs you down. It’s a lot of outside pressure.”

Last year, Kazik went 5-1 in the national competition, losing to Delaware Valley College’s Andy Povenski. Currently, Povenski is ranked second, and if he and Kazik continue to wrestle at their current level, they are sure to meet again in the final round. Kazik would relish the opportunity to settle this score.

“He’s a crybaby that whines to the referee about everything. It would be sweet to beat him.”

After college, Kazik says he would ultimately like to be a high school or collegiate athletic director, though in the meantime he’s looking to coach. He’ll graduate with a teaching certification and a degree in environmental science.

Kazik has already fielded offers from a few schools to be a head coach, but he’s content to just wrestle for now.