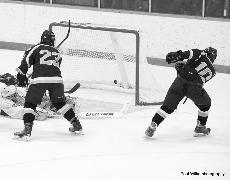 The Lawrence University men’s hockey team traveled to Eau Claire last weekend to take on the Blugolds in the second game of their young season.
Hot-handed sophomore Brad Scurfield, who scored the winner against UW-Stevens Point the week before, carried on his good form and scored a power-play goal for Lawrence in just the fifth minute of the game. Assists were credited to freshman William Thoren and junior Matt Hughes.
In the second period, however, the game fell apart for the Vikings. The Blugolds scored five unanswered goals in the period to overpower the Vikings and take an insurmountable 5-1 lead going into the final period.
Eau Claire scored again early in the third period to bring the score to 6-1 before Lawrence junior Reijo Wahlin scored a consolation goal off an assist from junior Jim Crowley to finish the game’s scoring.
The Vikings will open conference play this weekend with a home-and-away series against Concordia University. The home game will be Nov. 5 at 7 p.m. at the Appleton Family Ice Center. 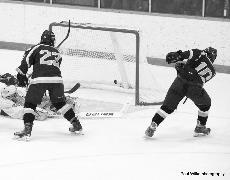