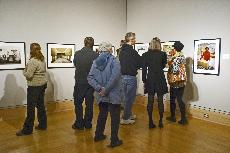 The Wriston Art Center opened its fourth exhibition of the year, “Wisconsin Labor: A Contemporary Portrait,” Friday, Oct. 29. Though Lawrence typically curates its own shows, Director of Exhibits, Curator and Instructor in Art History Frank Lewis decided that the current exhibition was too interesting to pass up. The opening was paired with a lecture by Lewis that put the exhibit in a broad yet enlightening context.
As it turns out, photography and labor have had a very long history together. From the first vague outlines of a boot shiner polishing a man’s shoes in Louis Daguerre’s “Boulevard du Temple, Paris” to the intimate portraits of laborers by the likes of Lewis Hine and August Sander, everyday people, and workers in particular, have been the subjects of photography since its beginnings.
In the words of Lewis, photography allowed those without the means to hire painters to capture themselves “doing what it is that they do.” He went on to poignantly describe the rise of the middle class and the way in which photography helped labor “[move] out into the public and [take] on a new definition.”
With a solid foundation for the work at hand, visitors moved into the gallery to see the exhibit. The exhibition combines the work of six photographers: Tim Abler and Dick Blau of Milwaukee, David Heberlein of River Falls, Assistant Professors of Art John Shimon and Julie Lindemann of Manitowoc and Jamie Young of Madison.
The Wisconsin Art Board commissioned these six photographers to create portraits of contemporary Wisconsin laborers, and the exhibit’s range of subjects is astounding. Abler portrays romanticized portraits of the pastoral workers of Northern Wisconsin, ranging from fishing instructors to farm workers.
Conversely, Shimon and Lindemann created formalized, black and white images of people with unique jobs such as “wildlife sound recorder” using an antique 8×10″ Deardorff camera, which they say “[amplifies] the gravity of a photographic confrontation.”
Heberlein’s subjects ranged from construction workers to a painter, and often seemed to have a narrative basis because of the way he portrayed individuals with stories all their own.
Blau, on the other hand, seemed very concerned with the physicality of work itself, picturing factory laborers in states of extreme physical exertion.
Finally, Jamie Young captured the diverse labor force of Southern Wisconsin and the ongoing struggle for factories and their workers to remain afloat in today’s economy.
Though I didn’t favor the work of any one artist, I would say that there were standouts among each set. Generally, I preferred the more intimate black and white portraits; color often seemed distracting from the simplicity of the moments being portrayed.
Furthermore, I enjoyed seeing allusions to the work of other labor photographers that Lewis highlighted in his lecture. The context he provided made the exhibit all the more enlightening and relevant.
Together, these photographs represent a startling variety of personalities, emotions and stories. They are portraits of laborers, but most importantly they are portraits of people, records of life and work as we know it. Though we wouldn’t have to stray far to see images like these for ourselves in everyday life, as Lewis says, the beauty of photography is that it “allows us to stare, allows us to fixate.”
And these are certainly some images worth staring at. 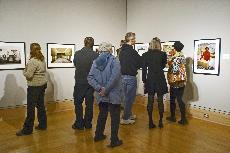