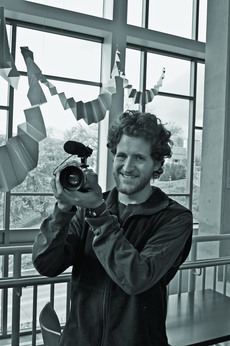 Lawrentians are pretty creative when it comes to finding ways to spend their vacation time, and junior Tom Coben is no exception. He spent five weeks of his summer in the Philippines exploring and shooting video in caves.
This trip was a part of the filmmaker’s largest undertaking to date: a documentary promoting cave conservation in the Philippines. The idea for this project was presented to Coben by his adviser, Associate Professor of Biology Jodi Sedlock. The two worked with fellow Lawrence student Paul Senner and a field team of native scientists.
“We surveyed about 20 caves on Siquijor – a small island province of the Philippines – and I documented everything on camera,” Coben explained. “We also conducted a lot of interviews with local people and government officials.”
Coben, who is pursuing a major in environmental studies and an interdisciplinary area in film studies, was behind the camera for most of the trip. He compiled about 15 hours of video.
“I was usually sent into the caves first, which resulted in some great footage of bats running into the camera, but I was also pooped on a lot,” said Coben. “There were lots of disgusting bugs and some hazardous climbs in the caves.”
The documentary, which will be completed by April as part of an independent study, will be presented to scientists in the Philippines. While this project has been very enjoyable for Coben, he still really loves to make traditional movies, which sparked his initial interest in film.
“In eighth grade, I had a lot of fun making goofy videos with friends – a lot of claymation,” Coben recalled. “We entered some movies into our high school film festival. I really became interested in the behind-the-scenes aspects after watching some videos about the creation of the ‘Lord of the Rings’ movies. It made me start to appreciate how much work goes into films like that.”
Currently the vice president of the Lawrence University Film Production Club, Coben has also participated in both of the filmmaking competitions hosted by Lawrence. He and Rosie Graber won second place in the “Sustainable Lawrence” competition.
As if that weren’t enough, Coben and Amelia Sancilio took first place in the “This Is Lawrence” contest by creating a video about LU track and field. Coben is now the student cameraman for the “This is Lawrence” video series that appears on the Lawrence website.
In addition to his involvement in film on the Lawrence campus, Coben also runs for the cross country and track teams. But his film interests extend to these groups as well: Every year, Coben produces a fun movie with his teammates. The series, called “Gun,” shows off Coben’s self-described “goofy” style by spoofing action movie conventions and exploiting special effects.
You can check out some of Coben’s work by visiting his YouTube channel – tomcoben – or by attending an LU Film Production Club Film Festival, which happens at the end of every term.