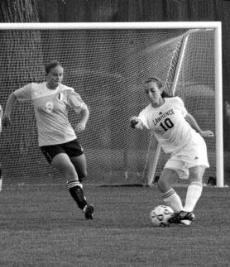 The Vikings extended their winning
streak to five with three straight
victories last week, topping Mount
Mary, Illinois College and Monmouth.
Mount Mary came to Lawrence
last Wednesday, but immediately
proved to be a far weaker side than
the hosts. Mallory Koula knocked in
her 17th goal of the season in the
eighth minute to get things rolling
for the Vikes.
Annie Craddock, Amanda Follett,
Ellie Galvin, Liz Seeley, Marcia
Silveira, Cadence Peckham and Mary
Lawler all also contributed goals in
the first half with Koula, Galvin and
Silveira notching two apiece. The
game was more than over at halftime,
as the Vikings led 11-0.
Jordan Holmes polished off her
first goal of the season in the 55th
minute as the Vikes were cruising for
a shutout. However, Mount Mary was
able to squeeze in a consolation goal
in the 85th minute, when Sydney
Deutsch exploited a small miscommunication
between the defenders
and backup goalkeeper Alyssa Onan.
Nonetheless, the Vikings proved their
superiority over the Blue Angels.
After their convincing victory,
the Lady Vikes hit the road to take
on Illinois College and Monmouth
in central Illinois. Illinois College
played first Saturday, and the Lady
Blues were tougher competition for
the Vikings Sunday. IC could not
hold off the Vikings’ offense, which
over the course of the match shot
17 times compared to a measly four
opportunities for IC.
Seeley scored an unassisted goal
in the 18th minute to get the Lady
Vikes off to a good start. Lawrence
would have many scoring opportunities
but IC worked hard to keep them
from entering the net. However,
Koula was fed the ball by Holmes
in the 66th minute and finished her
19th goal of the season.
The 2-0 lead would be threatened
by a surprise goal from IC’s Sarah
Morris 10 minutes later. The Vikings
had to take off cruise control for the
rest of the match, as IC turned up
the intensity. However, Galvin dealt
the killer blow that would deflate the
Blue Girls’ spirits in the final minute
of the match.
Sunday, Lawrence traveled to
Monmouth to face the Fighting Scots.
Lawrence unexpectedly took only
three shots in the first half, but two
of them resulted in goals.
The first goal came from Seeley,
who was assisted by Galvin in the
seventh minute. The second goal
came from Holmes ten minutes into
the second half. Koula turned in the
goal area and played Holmes a ball
on the ground, which Holmes shot
beautifully into the far post, catching
the side netting.
In the 88th minute of the game,
Koula scored from the left side of the
penalty area on a sharply-knuckling
Lawler-assisted shot which cut just
inside the near post. Assisted by an
Onan clearance, Koula scored three
minutes later to seal the Vikings’
third win of the week.
A fantastic week from the
Vikings was rewarded by the
Midwest Conference, which named
Koula Midwest Conference Offensive
Player of the Week. This is her second
consecutive week as Player of
the Week and her conference-high
third total MWC Weekly POW honor.
When asked about her award, Koula
refused to take all the credit, saying,
“I couldn’t have scored this many
times without the help of my great
teammates. 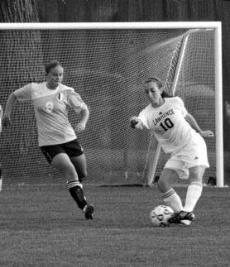