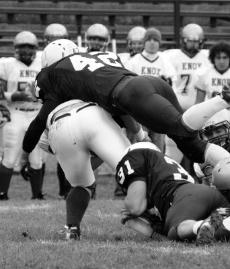 The Lawrence University football team hosted the Knox College Prairie Fire Saturday, Oct. 17 in Lawrence’s Hall of Fame game. Both the Vikings and the Prairie Fire entered the game winless, and both sides hoped to be the ones to leave the game with their first “W” of the season.
The first quarter started off poorly for the Vikings as they fumbled on their first two possessions. Knox turned the second Lawrence fumble into a 40-yard, three-minute drive that finished with a 2-yard rushing touchdown by Tighe Burke.
With two minutes and 52 seconds left in the first quarter, the Vikings took control of the ball on their own 15-yard line. The Vikings, led by two first-down rushes from sophomore running back Ben Hartman, drove the ball down to the Knox 8-yard line in a drive bridging the first and second quarters. However, they ultimately settled for a field goal attempt, which was converted by Cody Robel to bring the score to 7-3.
Neither team scored again until the Vikings took possession of the ball with 11 minutes left in the third quarter. Junior Jeremiah Johnson led the offense on the ground with a 19-yard run to the Knox 34-yard line, where senior quarterback Nick Maxam hit senior tight end Matt Hintz with two consecutive passes. Maxam’s throws set up a 5-yard touchdown rush by Johnson to put the Vikings up by two after a failed extra-point attempt.
Nine plays later, Knox struck back with an 18-yard touchdown pass from freshman Mike Pinter to senior back Brent Newman to put the Prairie Fire up 13-9. However Lawrence freshman Nate Nelson quickly caused another lead change, returning the following kickoff 73 yards for a touchdown. Nelson also caught a Maxam pass to complete the two-point conversion, making the score 17-13.
The four-point Viking lead would hold through the fourth quarter, as the Vikings just barely missed extending their lead when they drove to the Knox two-yard line only to watch time expire on their first win in six tries.
After the long-awaited win, senior linebacker Kevin Penza said, “I’m proud to say we were the better team today.” The Vikings hope to begin a winning streak Saturday, when they travel to Beloit to face the 3-3 Buccaneers. 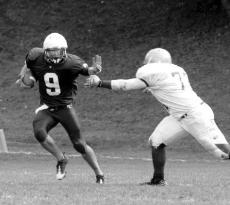 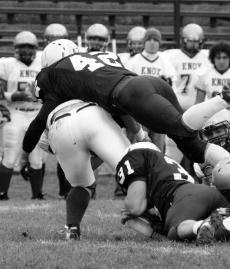 Vikings pile on to stop a Knox drive. Photo courtesy of Facebook 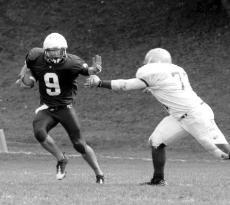