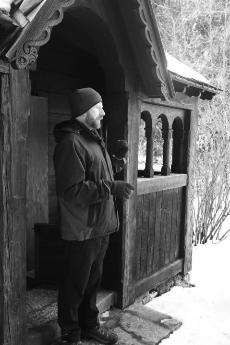 Every visit to Bjrklunden has one thing in common: Ben Meyer. He greets you when you come in the door, he tells of Bjrklunden lore, he calls you for lunch and he gives you a warm good-bye on Sunday afternoon. He exudes positive energy and patience, and he solves problems with enthusiasm and efficiency.
Yes, for many of us the word “Bjrklunden” is synonymous with “that red-haired guy who is there all the time,” but typically our knowledge extends no further – though a few of us happen to know that he’ s recently been sporting a goatee.
As it turns out, Ben does not live – as I had surmised – in a secret Bjrklunden apartment, but with his wife and two children in nearby Sturgeon Bay.
“In the summer I can ride my bike to work, but otherwise it’s only a 20 minute drive,” said Ben. “It’s very convenient.”
He came to the job at Bjórklunden relatively soon after his graduation from Lawrence in the spring of 2000. He earned a bachelor’s degree in theater and music, focusing on voice performance, though he added with a chuckle that he’s also a “recovering trombonist.”
He took the job at Bjrklunden in 2001, following his wife’s job as a string teacher in Door County. As the first student guest manager, Ben was creating the position as he worked.
“I was directed to ‘make Bjrklunden run smoothly.’ There was no one in the position before me, so there was a lot of trial and error in the beginning,” he said.
Until 2001, students and faculty would come up to the lodge and take care of it by themselves for the weekend, ostensibly leaving it in better shape than they had found it. “It didn’t really work,” Ben said.
Over the first few years, he worked with the other staff at Bjrklunden to create and streamline the systems and routines with which students have become familiar. And, yes, he proudly created the “opportunities.”
For most students, when the word ” opportunities” leaves Ben’s mouth it is generally understood as a euphemism for “chores.” However, “the opportunities are part of what keep Bjórklunden free,” he explained.
But Ben says it goes a little further than that. “Groups who come up to Bjrklunden are often people who don’ t always spend time together. ‘Opportunities’ create times for these students to work together.”
When asked about what he looks forward to each weekend, Ben did not take long to answer: “I always look forward to the chapel tour. It’s such an amazing creation dedicated to peace, and it’ s wonderful to share the history of Bjrklunden.”
While Ben is not working at the lodge on the weekends, he keeps himself busy as a County Board Supervisor. The Bjrklunden schedule allows him a lot of flexiblity and free time during the week to really commit himself to the supervisor position, and more importantly, his family.
With no reservations, Ben says he loves his job. What about unruly weekend visitors? “There is a small minority with small problems,” he said with a smile. “But 97.5 percent of the students who come up here are very responsible and helpful. 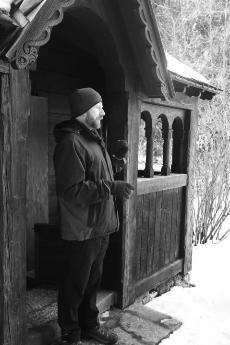