Bill Hodgkiss, Vice President for Business Affairs and Administration, is optimistic about the future of Lawrence&s endowment.
Courtney Doucette 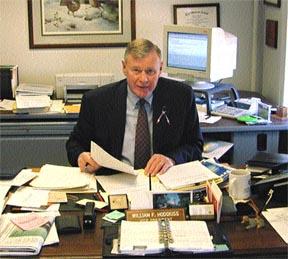 Bill Hodgkiss, Vice President for Business Affairs and Administration, is optimistic about the future of Lawrence&s endowment. (Ryan Marx)

The Lawrence University endowment has faced a number of hardships in this unusually poor economic climate, but a recent report says it has come out better than most other school’s endowments.A recent article published in The Chronicle of Higher Education stated that on average, college endowments dropped over the 2000-2001 fiscal year for the first time in nearly 18 years. Lawrence, too, faced losses, which the events of Sept. 11 and the Enron debacle have not helped to repair.

During the 2000-2001 fiscal year, the Lawrence endowment went down by three percent (or down nine million dollars, to 176 million), which was good in comparison to the eleven percent that many other colleges lost.

Bill Hodgkiss, vice president for business affairs and administration at Lawrence, explained how the university managed this. He pointed particularly to the school’s asset allocation.

There are two types of stocks: growth stocks and value stocks. While other schools were heavy in growth stocks, a riskier commitment, Lawrence was more evenly divided. Over the 2000-2001 school year, when growth stocks came tumbling down, this meant that most schools lost a good deal more than Lawrence.

Hodgkiss added, however, that alternately, when the riskier growth stocks were making great gains prior to 2000, Lawrence did not see the same investment earnings as other schools.

Regardless of how well balanced Lawrence’s funds were at the end of the 2000-2001 fiscal year, the market fall following the events of Sept. 11 left its mark on the endowment. Starting at 176 million, LU funds fell to 158.3 million, a loss of 18 million dollars, which was twice that of the losses over the previous year.

By Dec. 2001, Lawrence had gained back a good deal, increasing the endowment to 170 million. Hodgkiss seemed confident that the impact of the market’s Sept. condition will be minimal and that this year the endowment will level off.

After ringing in the new year, the collapse of Enron posed another problem to the school’s endowment. As Lawrence did not have any stock in the company, however, the university is in the same boat as other investors, including universities, which held shares of Enron. Lawrence faces only the impact of the market reaction.

The Enron disaster raises another larger question to university endowments concerning the ethics involved in investment. In an article printed on Feb. 1, 2002, the New York Times reported that a student group at Harvard questioned the possibility of insider tactics that may have brought the university tens of millions of dollars in illegal profits. Hodgkiss pointed out that first of all, Lawrence does not have stocks in Enron, and second, Harvard’s size requires a different system of fundraising not so comparable to Lawrence. Nonetheless, “raising funds to support the school,” commented Hodgkiss, “seems appropriate.”

To show that in general the Lawrence endowment is doing quite well in the face of these market mishaps, Hodgkiss offered a point of reference: In June 1995 the LU endowment was valued at 89.5 million dollars. Because of the advantage in the market place and the huge increase in gifts, one year totaling around 24 million dollars, the Lawrence endowment has increased by roughly half of its overall value in the last seven years.

In addition to the market and gifts, Hodgkiss praised investment advisor Susan Rutherford, a Lawrence graduate and representative of Ennis, Knupp, and Associates to the LU Investment Committee.