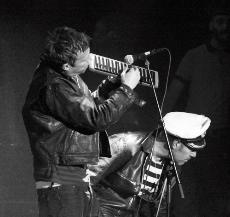 Gorillaz have finally come to life. No longer do the musicians have to take a supporting role to the cartoon alter egos created by Damon Albarn and Jamie Hewlett in 1998.
On the rarely touring band’s current tour, “Escape to Plastic Beach World Tour,” Albarn shares the stage with over 30 musicians, ranging from legendary soul singer Bobby Womack to Clash members Mick Jones and Paul Simonon.
Also joining Albarn on the tour is the hip-hop group De La Soul, various rappers, an eight-piece Syrian ensemble, a horn section and a string section. This is much different from the band’s past tours, in which the cartoon members took front and center with a smaller band playing behind a screen.
With “Plastic Beach,” Albarn has created his masterpiece. The album is a crowning achievement in the mixing of musical genres. Gorillaz has always been an experimental band for Albarn, much different than Blur, his prominent Britpop band of the ’90s. Gorillaz evidently has no boundaries, which is apparent listening to the new album: Where else can you hear songs featuring Snoop Dogg in addition to the great Lou Reed?
With a diverse sound that appeals to a wide range of listeners, “Plastic Beach” is sure to land on many year-end lists. The band returned Oct. 16 to Chicago’s UIC Pavilion for the first time since 2002.
This time around, the musicians took front and center, with the cartoon band projected on a screen. The show began with Murdoc, the fictional band leader, lividly asking, “How much longer is this warm-up band gonna hog the stage?” For Gorillaz in 2010, the cartoon characters still play a part in the live show, but the real musicians have taken control.
The show was easily one of the most impressive I’ve seen. How Albarn is able to manage a group of over 30 musicians is baffling. The agile Albarn was all smiles throughout the show, and he made it a point to embrace nearly every musician that walked on stage. He also never stopped moving, no matter his part in a song.
Featuring songs predominantly from “Plastic Beach” and the band’s previous album, 2005’s “Demon Days,” the show had plenty to like for Gorillaz fans.
The set began with the orchestral intro to “Plastic Beach,” followed by Snoop Dogg’s track “Welcome to the World of the Plastic Beach.” While not physically at the show, Snoop Dogg recorded a music video for the song, which was projected on the screen. It was a perfect way to set the tone for the show, introducing concertgoers to the fictional world of the Plastic Beach.
As the set progressed, older familiar tunes became prevalent, such as the ever-catchy “O Green World,” where Albarn chants “oh” repeatedly. By the end of the song, he had everyone in the crowd singing along with him. The hit song “DARE” was met with a wild round of applause as guest singer Rosie Wilson took over vocals.
After finishing the set and waiting to return for an encore, the crowd chanted “Feel Good!” in anticipation of the band’s most popular track to date. As the band returned to the stage, Bobby Womack emerged to sing the softer “Cloud of Unknowing” from “Plastic Beach.” The crowd finally got what they wanted two songs later, with De La Soul taking to the stage.
Albarn previously stated that “Plastic Beach” would be Gorillaz’s last album, but has recently retracted the statement. After attending this magnificent show, I can only hope that he continues with the band much further into the future. Even if the results are half as good, I’ll be there next time they come to town. 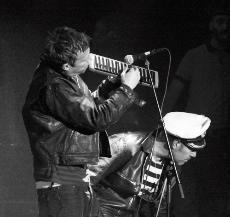