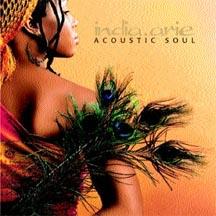 India.Arie’s debut album has caused a much-deserved stir throughout the music community. Masterfully produced by the artist herself, Acoustic Soul brings an un-muddled and poetic individual expression that jives with present trends and past traditions.At first listen, one might say her sound resembles that of Sade, Lauren Hill, or even Ani DeFranco, but attempts to characterize Arie’s music as anything but unique will yield few results. The familiar sound of a rehashed R&B mixed with mild hip-hop influences provides only the groundwork for this artist’s true talents for acoustic music and meaningful lyrics.

The album’s first single release, “Video,” (nominated for a Grammy in the category of Best Record), tops the list of the many of Arie’s powerful songs. In it she sings of an affirmation of herself, her rejection of materialism and ego in her music and entire life; a universal message of the need to love and accept one’s natural state that breathes life into a popular music scene fraught with hype.

Unfortunately, Arie diverts the attention from her new sound and ideas by unceasingly paying “tribute” to past singers and songwriters. This places an unbearable pressure on her music, as she claims the responsibility to singlehandedly carry on the entire tradition of R&B, blues, and jazz singing. Arie’s proclamation that Billie Holiday, Ella Fitzgerald, and Sarah Vaughn “Live on in [her],” as she says in track nine, is a bit egocentric, and, quite frankly, wrong.

Instead of being content with her own impressive contribution to these traditions and her deft combination of styles, Arie’s irksome invocations create the expectation that she is in the same league as these past masters, which, I’m sorry to say, she isn’t.

I’d like to add two more suggestions to this rather trivial complaint that I think would make this album a true archetype: shave off about five songs and include one instrumental. In the album as a whole, Arie sacrifices some originality in her redundant themes—both lyrical and musical. Also, just one track that allows a break from her voice could’ve made her singing all the more enjoyable.

A few minor complaints, however, shouldn’t dampen the true forcefulness of this album and to the inspiring and fresh contribution that India.Arie makes to the new R&B. Though the album as a whole can’t possibly stand up to the likes of Outcast’s Stankonia and U2’s All That You Can’t Leave Behind, with which it will compete for Album Of The Year, the single track “Video” should have no trouble vanquishing its competition. India.Arie has established an amazingly original framework within which to mature, perhaps one day becoming truly able to claim herself among the masters of the R&B singer/songwriter tradition.