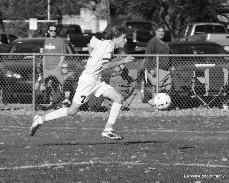 The Lawrence University men’s soccer team walked away from this weekend’s homestand against Monmouth and Illinois College with two wins, leaving them in great position to secure a spot in the Midwest Conference tournament, which they did on Wednesday night with a huge victory over St. Norbert.
The Monmouth College Scots (2-11-0, 1-5-0 MWC) were ambushed by the Vikings’ offensive attack in the first half of Saturday’s game. Senior Jared Padway started the scoring with a goal in the 10th minute off of an excellent pass from junior Stephen Exarhos.
Soon after that, senior Andrew King hit a one-timer off a desperate clearance by Monmouth goalkeeper Frank Bowman, sending the ball sailing over his head and into the net in the 31st minute. Barely three minutes later, sophomore Hashim Allah-Morad caught the keeper off his line and lofted a free kick into the back of the net from 40 yards.
The Vikings coasted for the remaining 50 minutes of the game, which ended in an easy 3-0 victory.
The scoring continued on Sunday as the Blueboys of Illinois College faced the Vikings for the home team’s Senior Day.
Freshman outside midfielder Joe Cullen scored his first collegiate goal in the fifth minute, with sophomore David Caprile and senior Paul Senner being credited with assists. Just 11 minutes later, Exarhos headed a lofted ball into the side netting off of a free kick by Allah-Morad.
However, the Viking’s defense was exposed on a breakaway in the 44th minute as Chance Vohlken scored to bring the score to 2-1. The Blueboys struck again shortly after the half, with Jeremy Moore blasting a shot past senior goalkeeper Andrew Finley’s fingertips off a pass from Corey Marin.
The final 35 minutes of the game favored Lawrence, but none of the Vikings’ chances found their way into the back of the net, forcing the game into extra time.
In the fourth minute of overtime, Exarhos scored a left-footed goal off a pass from sophomore Karl Mayer, giving the Vikings a golden-goal victory in extra time.
On Wednesday evening, the Vikings traveled to take on the St. Norbert College Green Knights with the opportunity to clinch a spot in the four-team conference tournament.
The Vikings came out strong, and put up two scores in the first half. The first score came off a penalty kick by Caprile after St. Norbert’s goalie went through Senner to try to get the ball. Later in the half, Padway blasted a brilliantly placed finish into the top right corner of the net after Cullen’s free kick popped out to him on the top of the box.
Freshman keeper Steven Solomon had a great game in net for the Vikings, saving a penalty in the second half to preserve the Lawrence lead. The 2-1 win clinched a berth in the conference tournament for the Vikings.
For his efforts in both games over the weekend, Exarhos was named Offensive Player of the Week by the Midwest Conference coaches. His weekend efforts brought his totals to three goals and five assists on the year.
The Vikings currently sit in fourth place in the conference and hold a 6-2 conference record.
The team will take a well-deserved break before playing at conference-leaders Ripon and at home against non-conference foes UW-Superior next weekend. 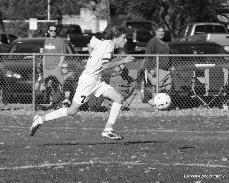