Athletes of the Week: Zach Joseph and Emily Muhs 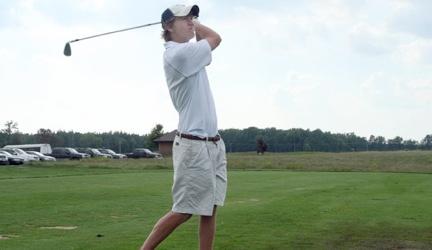 I am from Minneapolis, Minn.  I am a psych major, English minor

1) Who and what made you start playing golf?

I had never touched a golf club until I was in eighth grade, when my best friend and I went out in his backyard and started hitting any type of ball we could find. From that moment on, I was in love with the sport.

2) What was your best match?

My best match at Lawrence was actually during my freshman year in the middle of a rainstorm. I can’t explain why, but for some reason the conditions played towards my advantage. I got pretty sick afterwards, though.

3) What was the craziest thing that has ever happened during a match?

The craziest thing I’ve experienced was a tournament where it was so cold, rainy and snowy that no one could even grip the pencil to write their scores on the scorecard. After some of the players finished 13 holes of this, the rest of the tournament ended up being rescheduled, causing all of the scores to be pointless.

4) How do you feel when you look at your time playing golf at Lawrence?

When I reminisce about my time on the golf team, I feel accomplished because: I didn’t always shoot the best scores, it wasn’t always the nicest weather and I saw a lot of teammates leave the team, but I kept showing up to tournaments despite all of those setbacks. At points I wanted to give up, but I’m glad that I stuck it out.

5) If you were stranded on an island with one of your teammates, who would it be and why?

I would have to say Bricks because of all the great things he says that become classic quotes. I would be laughing for days.

1) Who and what made you start track?

I started running in fifth grade when we had a school-wide half-mile run to see who would do it at the city track meet, and I won, so I took up running. I was also a big swimmer until I got pneumonia before freshman year of high school, which forced me to do cross country instead of swim in the fall. I liked running, so I just kept with it.

2) What was your best meet?

Track-wise, I would say indoor conference this year. I was happy to be able to score in two events.

3) What was the craziest thing that has ever happened during a meet?

I have a huge scar on my left shoulder from a cross country meet my sophomore year in high school. I got pushed into a metal post early in the race when there was a turn and people were still packed up. I remember hitting it, but I never looked at what had happened until I crossed the finish line and the official ran up to me and started asking if I was okay. Not realizing what had happened I said, “yeah, I’m fine.” But then I noticed all the blood. The scar is still, six years later, very big.

4) How do you feel when you look at your time during track at Lawrence?

I’m happy I was able to run in college. I didn’t plan to. When I get disappointed in results or discouraged, I try and think of how lucky I am just to be able to do a sport. I wasn’t able to run senior year in high school — so I think of that and know running, whether I’m doing good or bad — hopefully good — is better than not running at all. I also am grateful to all the friends I made.

5) If you were stranded on an island with one of your teammates, who would it be and why?

Sam Stevens, so I could boss him around. He would do all the work, and I would take lots of naps.