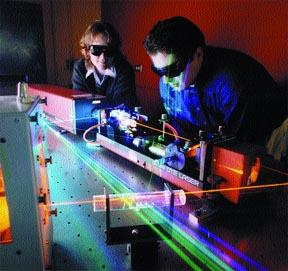 The efforts of the Lawrence physics faculty have paid off again. This time, the reward is a $400,000 Keck grant that the department will use to expand the physics program and to aid in strengthening national undergraduate physics education.Since 1998, the Lawrence physics program has received three grants totaling $850,000 from W. M. Keck Foundation, one of the nation’s largest philanthropic organizations.

Lawrence plans to use the grant to support the addition of a third signature program related to surface physics. Associate professor Jeffrey Collett will oversee the development of a program that will examine the effects of boundaries on properties of materials such as semiconductor interfaces, magnetic files, and liquid crystals.

The two existing signature programs at Lawrence were introduced during the 1980’s with the help of professors Brandenberger and Cook. At this time, Lawrence constructed the “laser palace” and a computational physics lab, both of which have served to help create specialty courses on modern physics topics.

These programs have been an integral part of Lawrence’s unique physics program for nearly two decades. With these, and now the third signature program, Collett remarked that Lawrence is creating a “premier” department for one of its size and that Lawrence hopes to, “develop a model program many small physics departments can emulate.”

The Keck grant will not only help establish the third signature program, but will support expansion of Lawrence’s two existing signature programs. This will allow a greater majority of students to have access to one of these signature programs earlier in their college careers without having necessarily to major in physics.

Brandenberger, who helped oversee the creation of the first two programs, elaborated on their benefits. “Signature programs are showcase-teaching endeavors that lend distinctiveness to a department and serve as powerful catalysts for change,” he remarked, and went on to add that “this grant will allow us to promote signature programs as generators of departmental vitality and improvement, not only at Lawrence, but at institutions around the country. We want to export, as it were, the concept of signature programs, emphasizing their importance in the teaching and learning of science.”

Faculty from Lawrence’s physics department plan to give presentations at other institutions and scientific conferences regarding the use of signature programs to help promote the idea of using the signature programs in departmental development and undergraduate instruction.

The fact that more than half of Lawrence’s physics majors go on to graduate programs in physics and related fields lends even more credence to the benefit of signature program use.

The W. M. Keck Foundation is one of the nation’s largest philanthropic organizations. It was established in 1954 by the late William Myron Keck, founder of The Superior Oil Company and focuses its grantmaking primarily on the areas of medical research, science and engineering. The Foundation also maintains a program for liberal arts colleges and a Southern California Grant Program that provides support in the areas of civic and community services, health care and hospitals, precollegiate education and the arts.