Step outside your ‘safehouses of identity’ 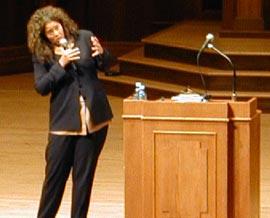 Actress, playwright, and author Anna Deavere Smith delivered an address entitled “Snapshots: Glimpses of America in Change” to a large Memorial Chapel audience on Thursday morning. Smith used her address to talk about education “with a lot of foolishness to suggest some very serious thing.” Since her childhood, Smith says she has sought to go places where she wasn’t expected or necessarily wanted. She quoted her grandfather’s words: “If you say something often enough, it becomes you.”

For Smith, disciplined curiosity about what lies outside one’s “safe house of identity”—the social niches and groups we often dwell in—is the key to education and one that is not often attained in an increasingly compartmentalized academic setting.

Smith spoke of college as “a place where you come to get the questions,” and that the pursuit of these questions required great discipline to be fruitful. In an interview before the convocation, Smith elaborated on this theme, saying that in her own experience, she had gone to college “looking for a lot of answers and come out with a lot of questions,” She had not been a good student, but the times had been so tumultuous (Dr. Martin Luther King Jr. was assassinated during her freshman year) that she left college not knowing what she wanted to do, but wanting to be involved in social change.

Smith continued to develop the idea of crossing boundaries or “mixing it up” at the American Conservatory studying acting after college. There, after an instructor told her to read any 14 lines of Shakespeare “until something happened,” Smith read 14 lines from Richard III and saw Queen Margaret. The power of the rhythms of the text had made the character come alive. Smith wondered if she could make the same thing happen with real people, could she conjure up the people around her.

This led her eventually to the work she does today as an actress and playwright, and as a teacher at institutions like Stanford and Harvard. Smith drew on her recent interviews with various people as an example of what she does. Smith stepped away from the lectern, taking the chapel stage as a theatric stage, and performed an interview with the author, journalist, and self-styled sociologist Studs Terkel.

Smith performed a number of other interviews—”organic poems,” as she calls them—illustrative of her own efforts “to learn about those individuals farthest from us.” She performed two interviews from her book Fires in the Mirror about race riots involving African American and Jewish communities in Crown Heights, Brooklyn, along with a similar set of interviews from her play based on Los Angeles riots (Twilight: Los Angeles, 1992) She closed the convocation with these two interviews, one with a Korean woman and the other with an African American member of the jury for the federal Rodney King trial. She also performed an interview from a project she complete last year at the Yale Medical School, where she interviewed doctors and patients to explore the gap that exists between the two.

She also participated in a book-signing and question-and-answer session in Downer Commons.