LU women blow lead, but regain it in time for victory 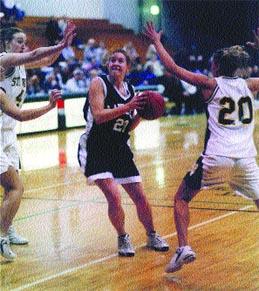 The Lawrence University women’s basketball team blew a sixteen-point halftime lead, but was able to regain it and hang on for an 80-77 victory at Beloit last Saturday. The Vikings jumped on the Buccaneers early. By the time sophomore forward Marie Molter hit a jump shot and made her free throw after being fouled with 13:53 left in the first half, LU was already up 17-4. The Vikings kept taking it hard to the basket, aided by the inside presence of Molter. After freshman forward Debbie Novotney knocked down a jumper with 5:57 remaining in the first, LU took what would be its biggest lead of the game: 35-13. The Buccaneers struggled to stop Lawrence’s magnificent shooting in the first half. The Vikings shot 52 percent from the field in the first half, and ended the half with a 49-33 lead.

The Vikings came out of the locker room thinking they had this game wrapped up, but Beloit had other ideas. They clawed their way back into the game, and over a 3:35 span in the second half, Beloit went on a 16-4 run. After senior guard Katie Wilke hit a three pointer with 3:05 to go in the game, Beloit had taken a shock lead 74-72. This was when the Vikings calmed down and took back control of the game.

Molter made a jumper with 1:31 to go and LU had a 77-76 lead, a lead they would not relinquish. Beloit had a chance to tie with four seconds left in the game, but Wilke missed her first free throw of two, and after a pair of Lawrence free throws, the Vikings hung on to win 80-77.