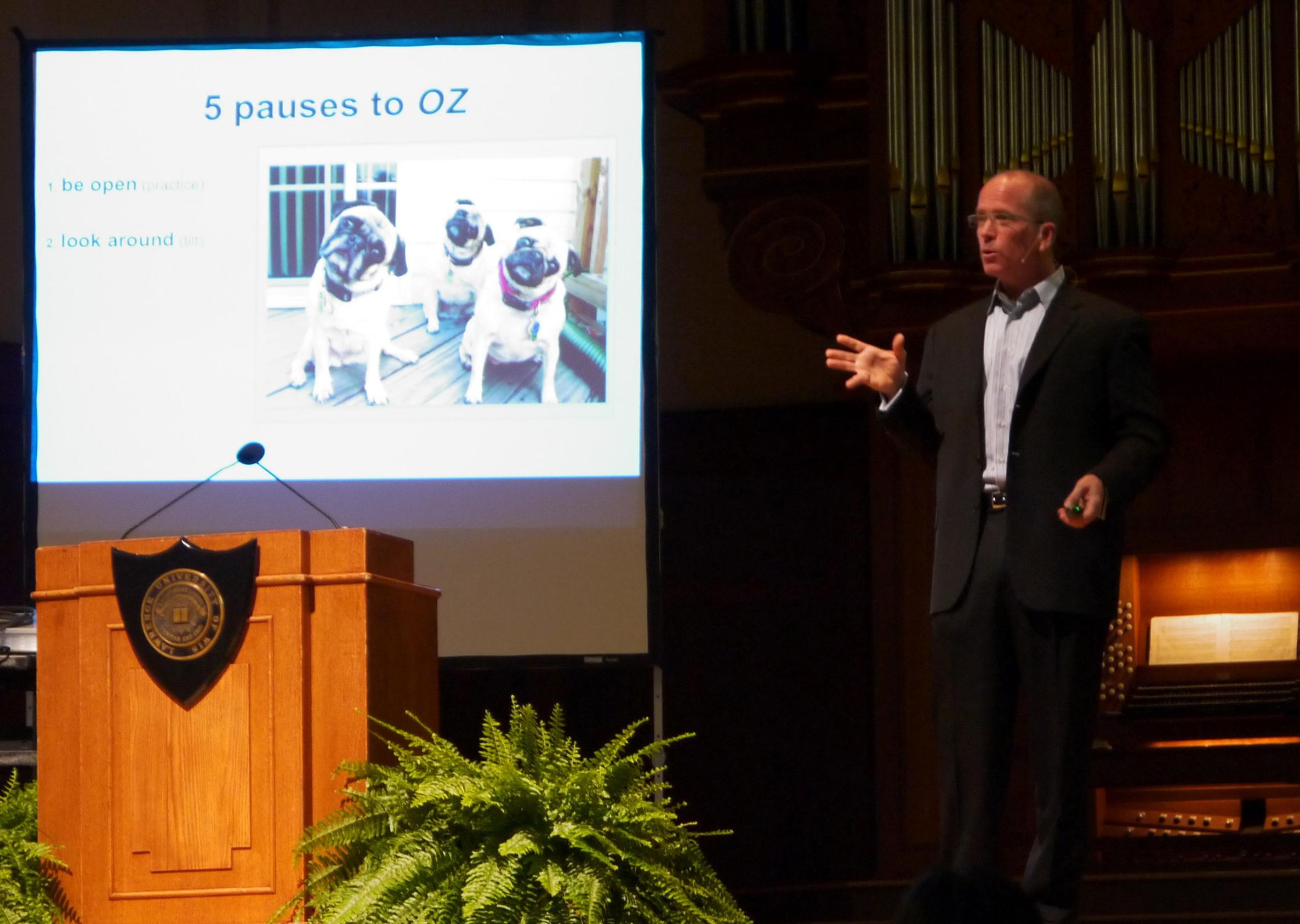 For the second convocation of the 2012-2013 school year, entrepreneur and founder of Lighthouse Consulting Larry Robertson, delivered a speech titled “Butch, Sundance, and Australia: Making the Leap From Thought to Action” on Oct. 11 in the Memorial Chapel. His speech explored Lawrence University’s 2012-2013 convocation series theme “From Thought to Action” and its relationship to entrepreneurship.

Provost and Dean of the Faculty David Burrows briefly introduced Daniel O’Connor, a fifth year studying economics and organ performance, to welcome Robertson to the stage. O’Connor is known for his founding role in the creation of Flicky, a curated video site. In his introduction, O’Connor discussed the importance of creating a catalyst for change on a scale larger than just businesses.

Robertson began his talk by comparing the Memorial Chapel to the location of his undergraduate college’s “Sunday Flicks,” a weekly event where a large group of students would gather to watch old movies. This event corresponded to O’Connor’s reference to Robertson’s book, “A Deliberate Pause,” and exemplified the importance of breaking from routine.

In his convocation, Robertson discussed “Butch Cassidy and the Sundance Kid,” a movie about how two leaders of a gang rob banks and trains in the West. The two titular characters are contrasted with Butch Cassidy, coming up with most of the ideas, and with the Sundance Kid, being a man of action. The movie was based on real events that took place in the early 20th Century.

He discussed a pivotal scene of a deliberate pause in “Butch Cassidy and the Sundance Kid,” in which the two main characters are in dire circumstances and the only thing one of them can think of is how nice it would be to go to Australia. Robertson presented this ability to make the unreachable seem reachable as a characteristic valuable in entrepreneurs. While reaching Australia is only an idea in the movie, Robertson suggested ways that a person could turn his or her own “Australia” into a reality.

With the example of “Butch Cassidy and the Sundance Kid,” Robertson then went on to provide five ways to reach what seems unattainable or what he called “5 pauses to OZ.” The five he suggested were for people to be open, look around, find a foundation first, know what they want to do, and to take the leap. He described each one of these in depth and explained how each of them connects to the others.

“Larry Robertson provided interesting insight on how to put thought into action.” Freshman Sara Larsen said, “His message was very relatable and entertaining, with a good amount of humor mixed in. I enjoyed his address and I’m glad I attended the convocation.”

Robertson finished his speech with an explanation of why it is necessary for people to go to their metaphorical Australias. He described how entrepreneurship and the desire to progress are ingrained in human beings.

“I have been considering how to use the principles discussed in the convocation in my classes,” said Professor of Psychology Terry Gottfried. He continued, “I think that even in classes where this can’t be done constantly, it is still possible to instill in our students a desire to move from thought to action.”