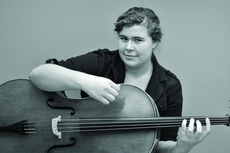 Fifth-year super-senior and cellist Carolyn Armstrong loves to help people get up on stage so they can share artistic talents with others. As the assistant program coordinator at Harmony Café for the past four years, Armstrong has put plenty of time and energy into building the arts community in Appleton. But Wednesday, Oct. 20 at 6:30 p.m., Armstrong will share her own musical talents at her senior recital in Harper Hall.
Armstrong began playing cello as a fourth grader at Badger Elementary here in Appleton after a stringed instrument demonstration at her school. She continued to play as a student at Renaissance High School of the Arts, where she was also involved in theatre and visual arts. In addition to performing in the school orchestra and starting a jazz group with her friends, Armstrong has also sang, played cello and guitar in several different folk groups.
Armstrong’s wide-ranging interests led her to Lawrence, where she found the chance to study in multiple areas. After graduation in June, Armstrong will have a Bachelor of Music degree in cello performance, a Bachelor of Arts degree in theatre arts and an Interdisciplinary Area in film studies.
A major focus of Armstrong’s work in film studies has been creating a documentary about music education in Haiti. Armstrong started going to Haiti the summer after her sophomore year with other Lawrence students and her cello professor, Janet Anthony.
The documentary earned Armstrong and Lawrence alum Stephen Anunson magna cum laude honors, and the film will be presented at the Haitian Studies Association Conference at Brown University in November. However, Armstrong’s experiences in Haiti resulted in much more than a documentary – they completely changed her entire life.
“The Haitians’ way of life is so vibrant, and their culture is so rich,” she commented. “They don’t worry about the everyday things that we get caught up with. I had never been anywhere like Haiti. I was struck with the idea that I could be friends and make music with these people who are completely different from me, and I’ve kept wanting to go back and learn from them and make music with them.”
In her work from Haiti to Harmony Café, it is clear that Armstrong strives to enrich other people and places. She believes that music and the arts are essential to creating successful communities, and hopes to make a career out of this interest.
Five total visits to Haiti have given Armstrong musical confidence, among many other things.
“I had a lot of injury issues during my first two years at Lawrence, and when I went to Haiti the first time, I wasn’t proud of my cello development,” she recalled. “But teaching and playing in Haiti made me realize things about my playing and aspects of my personality that I could bring into my playing. It also made me appreciate having my own instrument and teacher, and the education I was getting at Lawrence.”
Armstrong’s musical poise will definitely be on display on Wednesday night through a variety of music.
“Janáek’s ‘Pohádka (Fairytale)’ piece is a Debussy-esque, impressionistic work that will draw listeners into the various sounds of the cello,” she said. “Cassado’s ‘Suite for Solo Cello’ is a virtuosic Spanish work that is very expressive and pushes the limits of different emotions that you can experience in a piece. And Grieg’s ‘Cello Sonata in A minor’ is just intense… balls out!