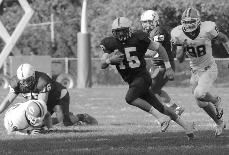 The Vikings football team battled the Carroll Pioneers in the Banta Bowl for a Midwest Conference matchup last Saturday. Despite Carroll’s pregame status as a heavy favorite, the game was extremely close, but the Pioneers held on to their seven-point halftime lead and won 21-14.
There was no score until late into the first quarter, when the Pioneers went on a 10-play drive ending in a three-yard touchdown run by Joe Beckstrand.
The Vikings (1-5, 1-4 MWC) answered back to tie the game at 7-7 early into the second quarter thanks to a 16-yard touchdown pass from freshman quarterback Luke Barthelmess to sophomore Tyler Mazur. However, the Pioneers (5-1, 4-1 MWC) scored a second touchdown less than two minutes later to give them the lead at 14-7.
The Vikings answered Carroll’s quick score with an almost equally quick score of their own, as a huge 47-yard pass from Barthelmess to junior wide receiver Jon Bruehl tied the game at 14-14 with just three minutes coming off the clock during the drive.
Unfortunately for the Vikings, the Pioneers were able to make another drive towards the end zone to score with two minutes left in the half and pull ahead at 21-14 to end the high-scoring first half.
Strangely, the halftime score would be the final score, as both teams left their offensive in the locker room where it would stay for the rest of the game. Thanks to a missed field goal by Carroll kicker Dean Beck and a second-half turnover by each team’s quarterback, the second half was completely devoid of scoring and the Pioneers took a win back to Waukesha with them.
The next game on the schedule for the Vikings is against Grinnell (4-2, 3-2 MWC) in Iowa. Kickoff will be at 1 p.m. Saturday.