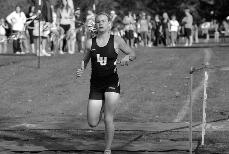 The Lawrence University cross country teams hosted the Gene Davis Invitational Saturday at Reid Golf Course in Appleton. On the 6,000-meter course, the women’s team claimed first place, while the individual titles on both sides of the competition were taken by Lawrence runners.
Junior standout Emily Muhs claimed the women’s title – her first title as a Viking – with a time of 19:40.71, finishing nearly a minute ahead of the competition.
Senior Annie Sullivan finished in third place, while sophomore Mary Kate Smith finished in fourth to help secure the team victory for Lawrence. The Vikings won the meet with an impressive score of 26 points, which put them well clear of second-place UW-Whitewater, who finished the five-team meet with a score of 49 points.
The Viking men’s team finished in second place with 47 points, placing them behind only Carthage, who won the title with 32 points.
Freshman Curran Carlile won his second meet of the year with an individual time of 26:22.89 on the 8,000 meter course. Sophomore Sam Stevens and senior David Zane finished the race with times of 27:04.35 and 27:16.13 to finish fifth and sixth respectively.
Besides their individual and team titles, the Vikings saw Carlile named Midwest Conference Performer of the Week. These impressive accolades were an impressive tribute to the namesake of the first annual home meet: former cross country coach Gene Davis, who coached the Vikings from 1956 to 1991.