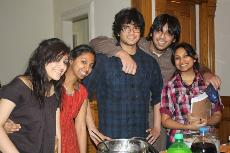 Although the Muslim Student Association is one of the youngest groups on campus – in its current incarnation, that is – it is also probably one of the most active, especially since the start of the 2010-11 academic year.
After a hiatus of a few years, MSA re-formed in fall 2009 shortly after Eid-ul-Fitr, the Muslim holiday marking the end of the month of Ramadan.
But the MSA is not exclusively a religious organization. Its members hail from all over the world, and come from a wide variety of religious and cultural backgrounds. Some are very observant of Muslim religious practices, but others less so. Indeed, in diversity of membership, the MSA parallels many other student organizations on the Lawrence campus.
“The MSA is not strictly a religious organization. We have members who come from different parts of the world, with different faiths and belief systems, who wish to learn more about Islam and who support our activities,” said MSA President Naveed Islam ’11.
In addition to its role as a religious and cultural community for members, the MSA is serious about acting as an ambassador and educator for the wider Lawrence campus.
“Educating the Lawrence community and clearing any misconceptions about Islam that may exist is certainly a part of our mission here as an active student organization on campus, but it is not our only goal,” explained Islam.
At the very beginning of the term, MSA organized an Eid dinner at the International House. MSA members prepared traditional foods and welcomed guests with great hospitality. This writer remembers a house packed with students, faculty, staff and even small children, all enjoying the warm atmosphere.
On a more serious note, the Eid dinner also served as an informal fundraiser for flood relief efforts in Pakistan. Since then, this fundraising has become one of the MSA’s primary goals.
On Saturday, Oct. 2, MSA organized a cookout and concert to jumpstart flood relief fundraising. They continued with “Henna for Pakistan,” an Oct.15 workshop in the Warch Campus Center in which participants were given henna tattoos.
Many other student organizations have joined MSA in organization flood relief events. From Greek organizations to Amnesty International, SWAHP and Lambda Sigma, this has truly become a campus-wide effort. In addition, the MSA has begun working with Harmony Café on the possibility of future events such as an open-mic fundraising night and a silent auction in January.
One of MSA’s ongoing projects has been a collaborative effort with Bon Appétit dining services to provide a Halal meat option in Andrew Commons. “Halal,” meaning a practice deemed permissible according to Islamic law, refers to a method of food preparation – similar to the “Kosher” designation in Judaism – in which the slaughter and preparation of animals is strictly regulated.
“Bon Appétit had already done research on providing a Halal meat option before we approached them and were eager to cooperate with us and try this out,” said Islam.
For those Lawrence students who do follow Islamic dietary law, Bon Appétit now offers Halal meats every other week in the “global” line.
In the near future, MSA hopes to start bringing speakers to campus, especially those who can speak to the Muslim-American experience, or the experience of women in the Muslim community. The MSA will also begin organizing weekly or bi-weekly trips to the Islamic Center of Wisconsin – just a short drive away – in the near future.
Long-term plans include a possible mentoring program involving Muslim youth in the surrounding community. “Lawrence students can act as mentors, so Muslim youth in Appleton know what it is like to live in college,” said member Aimen Khan ’13.
The Muslim Student Association meets bi-weekly on Tuesdays at 9 p.m., usually in the Kraemer room in the Warch Campus Center. Feel free to stop by! 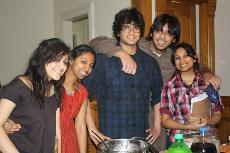