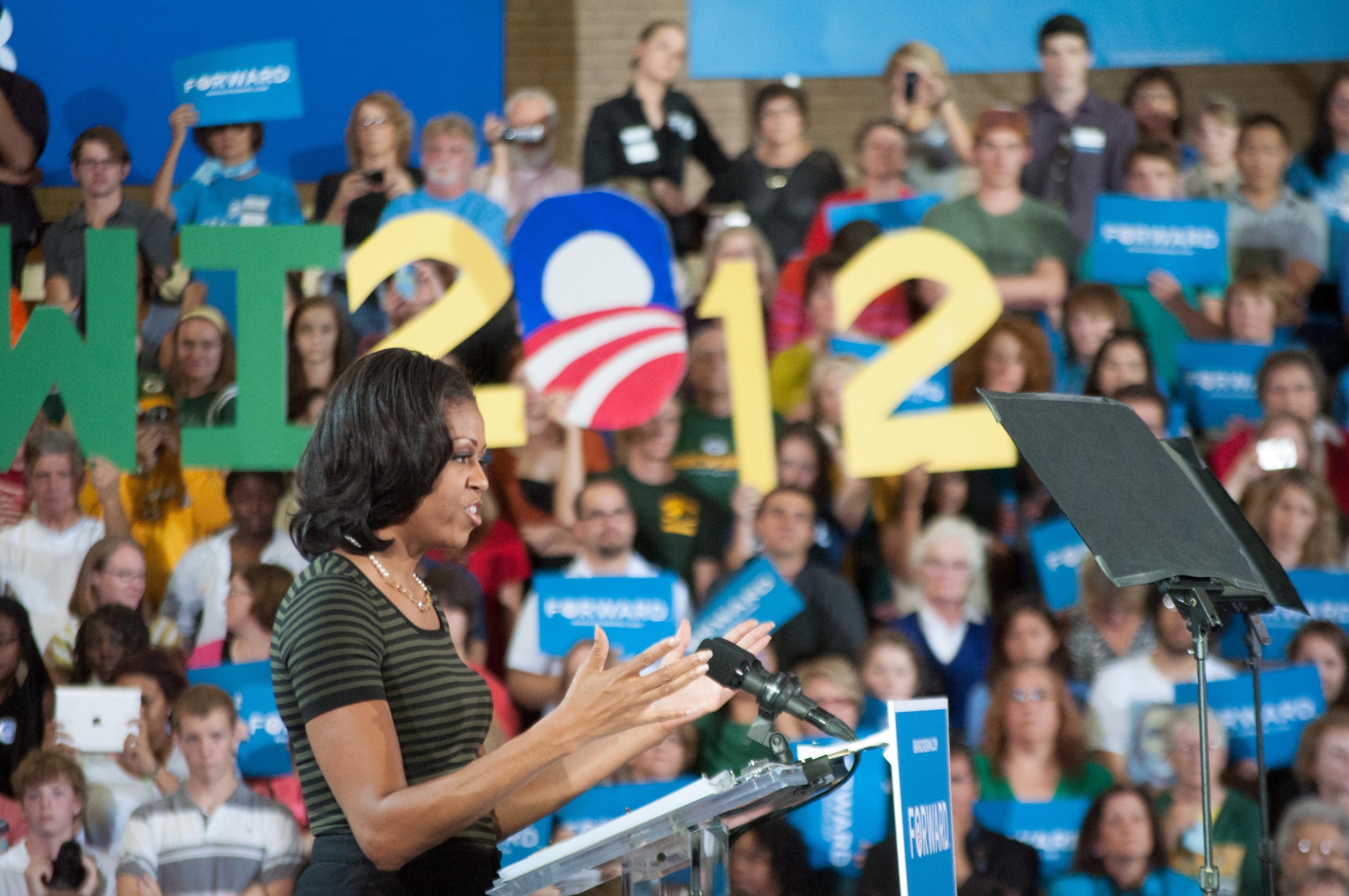 Obama’s stump speech began on a personal note by describing her admiration for her husband’s commitment, character and conviction. She proceeded to emphasize his hand in 30 straight months of private-sector job growth and the fight for equal pay for women in the last four years. Furthermore, she drove home policy initiatives like healthcare reform, ending the war in Iraq and increasing funding for Pell grants, federal financial aid for low income undergraduate students.

Michelle and Barack Obama’s modest upbringing, she explained, influenced their firm belief in giving back. She said, “When the door opens for you, you reach back and open it for others.” Obama declared, “Barack knows the American dream because he lived it.” Finally, she closed her 30-minute speech with a call for campaign volunteers to canvass in the neighborhoods and dorms of what many experts call a pivotal swing state.

One student was actually given the chance to introduce Michelle Obama to the stage. Sophomore Eli Massey was recruited the Sunday before Obama’s speech by sophomore Polly Dalton, a campaign volunteer who scoured the campus for a person to introduce the First Lady. Massey was “shocked and deeply humbled by the opportunity.” When he finally stepped onto the stage a week later, he “surprised [himself] by feeling incredibly calm and just drew on the awesome energy of all of Obama’s supporters.”

Raised by a single mom in the suburbs of Chicago, Massey faced significant financial obstacles in paying for his college tuition. In his speech, Massey explained how his Pell Grant allowed him to attend Lawrence and subsequently become involved in growing fresh produce in the Sustainable Lawrence University Garden. “Obama has had our backs for the last four years so we have to have his for the next 39 days,” asserted Massey.

Dalton elaborated on specifically what President Obama has done for students: “The President has done a lot to help with boost higher education funding and make healthcare more available as we are in college and working to find a job immediately after. With elections just around the corner, getting people fired up to vote is crucial.”

The speech was officially announced to the Lawrence community on Monday, Sept. 24, and the Facebook newfeeds of Lawrence students were immediately alight with excitement about the First Lady’s campaign stop in Appleton. Lawrence originally planned to distribute tickets to students, faculty and staff on Tuesday, Sept. 25 and Wednesday, Sept. 26 in the Warch Campus Center; however, all tickets were distributed on the first day to a line that snaked from the Somerset Room to the front door of the Campus Center.

While waiting in line on the first day of ticket distribution, Lawrence Postdoctoral Fellow of Biology Brian Piasecki said, “I’m standing in line because I want to hear about the contrast between the party platforms of Obama and Romney.” Assistant Professor of Philosophy Mark Phelan, also in line, commented, “I’m pretty dissatisfied with the political process in the country right now so it’ll be interesting to see if somebody can break the frozen sea within.”

For more information on how to get involved with local campaign efforts, visit http://www.barackobama.com/WI/.