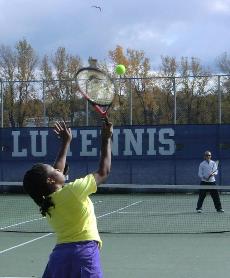 The Lawrence University women’s tennis team defeated two conference rivals at home last Saturday, knocking off Monmouth and Knox by identical 8-1 scores, then won a closer match against last-place Ripon last Wednesday.
Junior captain Beth Larson, in accordance with her season-long form, defeated Monmouth’s Kimi Wegner, 6-4, 6-0, and Knox’s Dana Pierce, 6-4, 6-1, for two No. 1 singles victories.
Sophomore Jennifer Roesch also picked up two wins at No. 2 singles, playing a close match against Ashley Reynoso before winning 6-2, 4-6, 1-0, then crushing Knox’s Megan Funk 6-2, 6-0.
Freshman Gayatri Malhotra notched two victories at No. 3 singles for Lawrence, while junior Kat Valde cruised past the No. 5 singles players from both Monmouth and Knox. Carla Schmidt and Martha McDonnell, playing in the remaining two singles matches, won against Knox and Monmouth respectively but each freshman finished the day with a 1-1 record.
The doubles teams went 6-0 for the day, bringing Lawrence two easy 8-1 victories in conference matches.
Malhotra was honored by the conference, which named her player of the week, for her victories. Over the course of the weekend, she won four matches – two singles matches and two doubles matches with her partner Valde.
After the two-match sweep on Saturday, the Vikings traveled to Ripon (4-7, 0-4 MWC) and grabbed their third win of the week. While Larson, Roesch, Malhotra and Valde, playing at the top of the Vikings’ lineup, each grabbed their fifth and sixth victories of the week, the Vikings struggled on the lower matches, losing the No. 3 doubles match and both the No. 5 and No.6 singles matches.
Having now clinched a berth in the conference tournament, Lawrence (8-4, 3-0 MWC) will host conference rival St. Norbert at 3 p.m. Friday. 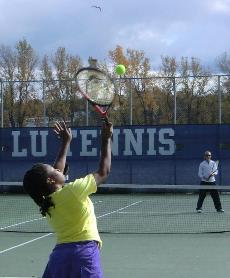