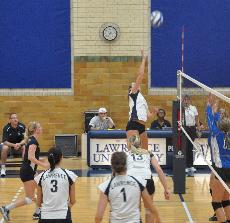 The Lawrence University volleyball team dropped a five-set heartbreaker to Carroll University last Thursday night. The match was the conference opener for the Vikings, who fell to 8-11 on the season.
The Lawrence players dug themselves into a hole early in the match, losing the first two games to the Pioneers by scores of 25-17 and 25-23.
The Vikings were able to mount a comeback in the next two games and tied the match at two games each after beating Carroll easily 25-17, 25-16 in the third and fourth games. The fifth and decisive game was very tightly contested, but the Pioneers (11-6, 1-0) snagged a 15-13 victory to win their conference opener.
Sophomore Shannon McLain and junior Clare Bohrer led the way for the Vikings with 12 kills each. Sophomore Emma Kane had nine kills for the Vikings, who were playing without key outside hitter Melissa Schnettler due to injury. Kane was also tied for second on the team with 19 digs. Freshman Kathleen Rowland had 28 digs to lead the way for Lawrence.
Bohrer leads the team in kills this season with 192, which leaves her averaging 2.91 kills per game. Freshman Diane McLeod holds the team lead in assists, with 497, enough for 7.53 per game.
The Vikings will head south this weekend to face Knox and Grinnell, followed by a trip to Ripon for a rivalry game next Wednesday. 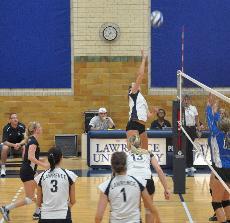