Stephen Anunson and Katie Langenfeld are the founding members of the Film Production Club. Photo by Alex Kohnstamm
Abigail Wagner 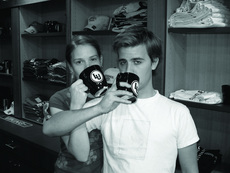 Stephen Anunson and Katie Langenfeld are the founding members of the Film Production Club. Photo by Alex Kohnstamm (Karl Hailperin)

The Lawrence University Film Production Club’s 48-hour Film Festival has finally arrived. Friday, Oct. 9, five teams of students with all levels of film experience will meet in Hiett Hall to receive prompts and to begin scripting films that they will create over the weekend in a fun event designed to promote film production.
Film Production Club co-presidents Stephen Anunson and Katie Langenfeld will assign each team of three to six students a genre at the first meeting today. The teams must write, shoot and edit a short film by Sunday evening. As a basis for comparison among the films, there will be one prop, character name and line of dialogue that all teams must use.
Films will be screened in the campus center cinema Friday, Oct. 16. There will be no judging. The rules of the festival are not rigid; its planners “just want to have fun and see what people can do,” Langenfeld said.
Another goal of the festival is to give people who cannot commit to weekly film club meetings an opportunity to participate in a short film project, Langenfeld added.
The event’s hosts emphasize that participants need not be awake all 48 hours. An individual may be involved in only some stages of the process. Langenfeld anticipated that the challenges for participants will be “coming up with an idea right away” and managing time.
Film club member and amateur filmmaker Micah Paisner, a junior, is eager to be involved because he has never been able to participate in the 24-hour Play Festival. He plans to write and act this weekend, and he is “excited to see what everyone comes up with in such a short time.”
Participants were not required to have film experience or to own their own video equipment. Anunson and Langenfeld will be available to assist with planning, shooting and editing.
A similar festival was planned for last spring, but it was slated to occur over reading period, and not enough students could participate. This year, the film club scheduled the festival earlier in the term in hopes that more students would be available.
Planning for this fall’s festival carried over from last spring and went throughout the summer. Significant changes from last year included more advertising, information sessions and the single prop, character and line that all teams must use, Langenfeld said.
Participants enrolled this week at tables outside Andrew Commons or at information sessions. They could enlist as a team or request to be placed on one.
The Film Production Club, formed a year ago, provides opportunities for students to share and collaborate on film projects. In addition to meeting weekly, the club hosts one film festival each term. Last year’s events included a Director’s Cut festival, in which teams emulated a famous director, and another festival open to all genres. This term’s festival promises to be satisfying for its hosts and participants.