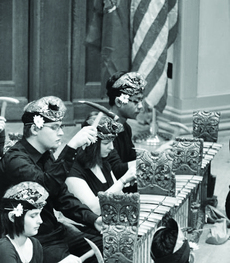 Anyone who went to Lawrence’s recent “Kaleidoscope” concert at the Fox Cities Performing Arts Center will remember the otherworldly sounds and appearance of the opening ensemble – a long row of large ornate instruments played by costumed people wielding wooden hammers.
This is the Lawrence University Balinese Gamelan Ensemble, taught and maintained by Postdoctoral Fellow of Ethnomusicology Sonja Downing and her husband, I Dewa K. A. Adnyana.
The ensemble’s inception came in the summer of 2008 when Dean of the Conservatory of Music Brian Pertl – then incoming – contacted Downing, who was the incoming fellow of musicology, with regard to her specialization in Balinese music.
“He wanted to know if I’d be interested in starting a gamelan ensemble,” said Downing. “I said ‘sure, but by the way, that’s what my husband has been doing his whole life; maybe he should come too.'”
Dewa began his gamelan career when he joined his cousin’s ensemble at age seven. He is a long-time member of the renowned Balinese group Sanggar Seni udamani, which has been a cornerstone of gamelan music since the 1970s. With the group, Dewa has toured internationally and taught all over Bali.
When Downing arrived in the fall of 2008, she began the search for a gamelan – the large set of instruments necessary for an ensemble. Her search stopped at the Robert E. Brown Center for World Music in Champaign-Urbana, Ill., which generously offered to loan its gamelan to Lawrence.
This stroke of luck found students driving vans down to Illinois in the early months of 2009 and returning with bronze metallophones, xylophones, gongs and drums, eager to begin rehearsing as an ensemble.
After Dewa arrived to begin teaching in the fall of 2009, he and Downing were able to start planning for the acquisition of Lawrence’s own set of instruments.
In Bali last December they commissioned an entire gamelan, and after over a year in the workshop the sparkling, glittering, hand-carved and hand-forged instruments will be arriving in April of 2011.
In case you needed more incentive to see the group perform, these dazzling new instruments should be enough.
At the heart of gamelan music, says Downing, is the basic Hindu philosophy of complementary opposites. This idea forms the aesthetic for gamelan music, and can be seen in the interlocking rhythms played by the musicians, or the cycling pitch patterns that seem to be played backward and forward simultaneously.
The ensemble itself is divided into pairs using instruments with bronze keys whose pitches do not quite match. The resulting dissonance gives a quavering “shimmer,” perhaps one of the most unique and enchanting characteristics of gamelan music.
Taught completely aurally, gamelan exposes students to a pedagogical approach very different from what they experience in western music performance.
“It’s helped me tremendously with my teaching,” said David Hamilton, a fifth-year music education major who is currently student teaching at Appleton West High School and Wilson Middle School.
“And having Dewa here to teach us is just incredible,” he added. “He’s a rock star in Bali.”
Because no musical notation is ever used, the music is very accessible to non-musicians, too. “We really like to get people from the college as well,” said Downing. “You need absolutely no prior musical experience.”
To join the gamelan ensemble, one can sign up for MURP 171 next term or simply start attending rehearsals, which are currently held in Lucinda’s Wednesdays at 8 p.m. and Fridays at 5:15 p.m.