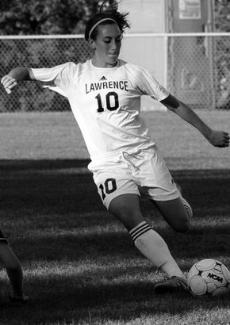 The Lawrence University women’s soccer team gave itself a huge boost in the conference standings last weekend by beating Knox College and Grinnell College in a pair of road matchups.
The Vikings (5-6, 4-1 MWC) are now in second place in the Midwest Conference standings with just four conference games remaining. Only Lake Forest (7-4, 4-0 MWC) has a better record than the Vikings.
The Vikings started the weekend off with a bang. Backed by two goals from All-Conference junior Mallory Koula and another from senior captain Liz Seeley, the Vikings breezed to a 3-0 victory over Knox.
Senior captain Sarah Ehlinger had an assist for the Vikings, as did sophomore Ellie Galvin. Lawrence dominated from start to finish, outshooting Knox 21-6. A seven-save performance by Knox goalkeeper Mollie Strawn kept the Prairie Fire from being embarrassed, though Strawn was topped by a shutout performance by Viking goalkeeper Cassie Burke.
Lawrence continued its dominance the following day against Grinnell, earning a well-deserved 3-1 victory. Koula added another goal, and Ehlinger put two in the back of the net, single-handedly outscoring the Pioneers.
Galvin assisted on another goal, and Seeley also had an assist for the Vikings, who once again outshot their opponents, finishing up 19-9 in shots. Burke allowed a single goal in the 40th minute, but made four saves in the winning effort.
For her efforts on the weekend, Burke was named the Midwest Conference Defensive Player of the Week. She has allowed only 10 goals in eight games this season and has a 5-3 record as a starter.
Koula and Ehlinger lead the team in goals with eight and seven respectively. The dynamic duo also led the team with four assists apiece. Three of Koula’s goals have been game-winning shots.
The Vikings are back in action Sunday, when they will travel to Carroll, the team that heartbreakingly ended their season last year. After attempting to get their revenge on Carroll (7-3, 3-0 MWC,) the Vikings will play a match at home against Monmouth Oct. 16. 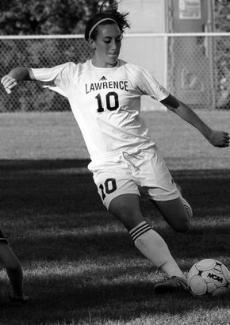