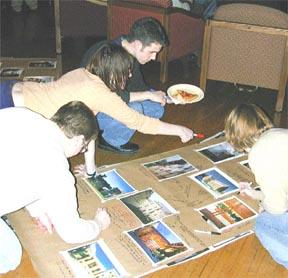 Architects and designers from the architectural firm Sasaki Associates, Inc. held an informational meeting on their progress on designs for the new student union on Wednesday night. Over one hundred students showed up for the event, which included free pizza.The meeting was not a typical forum. The Sasaki designers spread dozens of computer generated images of potential designs for various parts of the union over a section of the floor in Riverview Lounge and asked students to write their comments and suggestions next to the pictures. The pictures included designs for everything from formal classroom-type spaces to lounges to bar- and pub-type rooms.

Norris Strawbridge, a principal architect with Sasaki, says this type of meeting is a common practice at his firm and one they’ve had success with. “People respond to pictures in direct ways,” said Strawbridge.

Strawbridge said that one person’s “light and airy” room might be quite different from another’s so gathering feedback on actual images helps to cut down on confusion generated by purely abstract discussions of design.

Students were surprised by the method. “I expected a forum,” said Brad Behrmann. Both he and fellow student Crystal Chan thought this was a better way to gather feedback.

Abbey Coyne thought the meeting was a good idea and said she liked many of the designs. “I’d like them to stay away from sterile, hard lined models. Light and texture are key,” she said.

Student comments covered a wide range from “phat stairs!” to “neoclassical=bad” to “this looks like Lego Land.” Student comments were rarely simple approval of a design, but generally registered disapproval or suggestions for improvement.

Both students and architects were pleased with the process and the results. 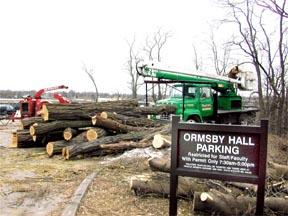 Work begins indoors and out on major campus construction projects. Trees were cleared from behind Ormsby to make room for the new residence hall. (Quinn Lake)