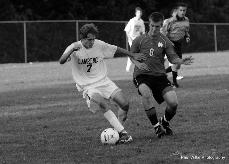 The Lawrence University men’s soccer team hosted North Central College last Saturday. The Vikings set out to win their fifth of six home games and build on their four-game winning streak, but the Cardinals (4-3-2) held on for a 1-1 tie, the Vikings’ first tied game of the season.
Defense was the focus for both sides in the first half, as several offensive attacks were thwarted by each defense. Most notably, freshman goalkeeper Steven Solomon saved an excellent shot off a free kick from just outside the 18-yard box as halftime approached.
In the 54th minute, the Cardinals whipped a corner kick into the box and connected on a header to send it past Solomon. Sixteen minutes later, the Vikings struck back on an attack led by senior midfielder Jared Padway and freshman forward Cameron Pieper.
Pieper crossed a ball to Padway as senior Bennett Pang made a run into the box; Padway then connected on a quick pass to Pang, who poked the ball past the keeper.
Padway commented, “This is the third time Benny and I have connected for a goal this year. When me and that short-legged Hawaiian get together we make magic happen.”
Pang responded in kind, saying, “Jared is an excellent passer and he puts [the ball] exactly where it needs to be . 65 percent of the time.”
With 20 minutes to go in the half Jake Muszczynski received his second yellow card of the match, forcing North Central to play a man down for the remainder of the game. The Vikings had several chances to take the lead, but could not break the tie, even after twenty minutes of extra time.
The Vikings tied their opponent for the first time this season, but avoided a loss and remained undefeated at home.
After facing UW-Oshkosh on Tuesday, the Vikings will travel to face Grinnell College and Knox College in two important conference matches this weekend. If they sweep their weekend series, the Vikings will come out of the weekend with a 4-0 mark in conference. 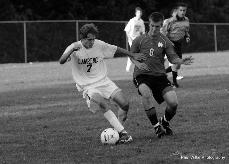