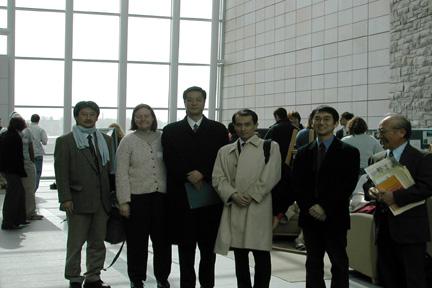 Waseda University probably wouldn’t be the first thing you’d notice on a bus tour of Tokyo. This prestigious university is made up of a number of different schools which, because of the difficulty of securing extensive amounts of land in the world’s second largest city, are spread throughout Tokyo. Note, however, that Waseda is one of Japan’s most prestigious universities and one of two internationally acclaimed universities in Asia. As you probably read in President Warsch’s letter home–you know, the one about next year’s tuition increase–Lawrence will host 19 Waseda students over the 2002-2003 academic year. These students are from various departments; not all of them are English majors (if any). At Lawrence, they will participate in either an international studies, environmental studies, or gender studies program in addition to receiving ESL training.

The two universities have a history of student exchanges. For a number of years, a few Lawrentians and students of other ACM colleges have traveled to Tokyo to attend Waseda. The program that will begin this fall began to take shape a few years ago, when Waseda expressed interest in creating a larger exchange program. Several ACM schools reciprocated interest, but only Lawrence made the final cut.

Several factors played a role in making Lawrence stand out. Waseda professor Takakazu Kuriyama, former Japanese ambassador to America, a Lawrence alum, and last year’s visiting Scarff professor, certainly did much to advocate the university. The expansion of the East Asian languages and cultures department is also a plus.

Lawrence is the recipient of grants from the Luse Foundation and the Freeman Foundation. These grants help to finance the recent student-faculty trips to East Asia and have provided two new professorships. One is currently filled by the government department’s Mark Frazier, a professor of East Asian political economy, and next year a professor of Japanese language will join the LU faculty. The 19 Waseda students will nicely compliment the additions to the EALC program, making possible Japanese language tutoring and a language table.

In preparation for the students, four faculty members from Waseda University will visit the LU campus next Wednesday. Lawrence is very fortunate to have made this connection with one of the world’s most highly acclaimed universities. Hopefully this program will serve as a basis for planning additional programs in the future.