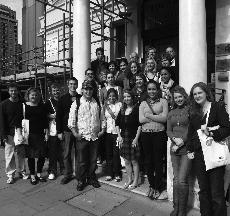 “Brechin Place has been held in the affections of former students as the home of the London Centre for more than 12 years, providing offices, teaching spaces and student dorms in the same building. Under the new arrangements with FIE, the academic/office spaces and student housing will be in separate locations, but still in the same familiar ‘South Ken’ neighborhood.”
–The Lawrentian, Features section, 11/21/2008, “LU London Centre Announcement”
I’m now convinced that every person has only a finite number of decisions in them. I passed my limit towards the end of what I have come to think of as – insert dramatic musical effects here – “The Move.” That’s it! No more decisions. Ever! They say that moving is one of the top traumatic events. I’ve been with Lawrence and at Brechin Place for 12 years, and sorting through the LULC Stuff Mountain at times felt like psychoanalytical archaeology. But, I learned a lot about how great people can be.
I’ll elucidate. The “office spaces” referred to above are comfortable and efficient, but they are pretty small by comparison to what we had at Brechin. So, choices had to be made! For instance, the LULC library, though very modest by Mudd standards, had about 1,250 books, and I had to decide which books we needed to keep for current or pending courses, which of those should be available in the limited space at the new premises, which could be stored – once I had decided on what budget storage we could find – and which ones would simply have to go – and then decide where and how to dispose of those refugees. Honestly, I love books. It was like “Sophie’s Choice”!
Fortunately, some removal fairy inspired me to contact our local Oxfam thrift store, which has a dedicated bookshop about 10 minutes away on Gloucester Road. Salvation appeared in the shape of Bobby. As Program Manager Jen Cox and I simpered winningly, Bobby gradually agreed to sort through the books, bring packing cases to transport the ones he could sell, bag up the remainder for recycling, and take the whole lot away. Jen wanted to marry him right there, and we got to feel ecologically proud as well.
We managed to remain on the green, high ground throughout most of the sorting and packing during the following weeks. The various electrical items – including a truly puzzling number of boom boxes! – crockery and china, two sacks of VHS tapes and a pile of general bric-a-brac were collected by the British Heart Foundation. Don’t worry kinder fans – the toys are safe at my house.
Bookcases went to a specialist charitable outlet that helps out ex-homeless and low-income families setting up homes. Towels and textiles are now available to the residents of Battersea Dogs and Cats Home to make their quarters extra comfortable.
Jen did a fantastic job of developing a retrieval system and preparing books and papers for storage. The storage itself – in the amazing former coal cellars of one of the grandest apartment blocks in London, next to the Royal Albert Hall – came to us via Fabio, our former house manager, who also helped to move all the crates over there.
The charity workers were friendly, reliable and efficient. I will never forget the girl from around the corner, who decided to take our Dr. Evil swivel chair, wheeled it home through the streets and e-mailed to say that she made it before the rain started. Nor will I forget the two law students who took two desks and sundry smaller items in a very little van and who helped remove my office door so that we could get the larger desk out.
We finally moved the last of the boxes to Foundation House, our new home, Aug. 27 in a van with a satnav system voiced by Homer Simpson. D’oh!
The Lawrence University London Centre will be celebrating its 40th Anniversary next year. More than a quarter of those years were spent at Brechin Place. 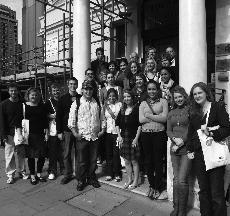