Silliness and drama come together in The Mikado

Set construction is in full swing for next weekend’s production of The Mikado.
Peter Gillette 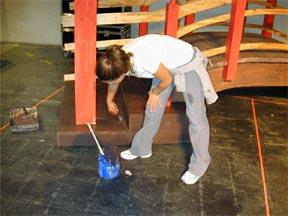 Set construction is in full swing for next weekend’s production of The Mikado. (Quinn Lake)

When choosing between attending The Mikado March 7, 8, and 10 and committing suicide, attend The Mikado, because suicide’s a capital crime. Or so Gilbert and Sullivan seem to suggest.If the choice is more difficult than that for you, first seek professional help, and then remember that W.S. Gilbert and Arthur Sullivan’s satirical opera is one of the most beloved operas in the repertoire, delighting audiences since 1885. Then, of course, there’s always the inherent value of human life, not to mention the stellar LU cast bringing The Mikado to life.

Coming just before tenth week, this year’s conservatory opera looks to provide a welcome two and a half hours of diversion, British humour, and a liberal dose of general silliness.” [Gilbert] comments on pompous fools and social relations in The Mikado, and he pokes fun at the politicians of the time, as well as some of Gilbert and Sullivan’s own critics,” explains director Kathy Privatt, associate professor of drama.

Although the setting and some of the musical themes are derived from Oriental sources, the comedy and social behaviors Gilbert and Sullivan satirize are distinctly British. In other words, don’t expect a serious historical work about Japan.

The satire is quite bitter. The Mikado(Jonathan Silvia, Gabe Lewis-O’Connor) makes Ko-Ko (Tim Sullivan, Tom Gilmore) the Lord High Executioner. Meanwhile, the Mikado’s son, Nanki-Poo (Robin Griffeath-Loeb, Jonah Nigh) tries to kill himself, until he remembers that suicide is a capital offense. So, the Lord High Executioner offers graciously to provide professional assistance by murdering Nanki-Poo, who wants to live for a month with his wife before being murdered. This delightful first act sets the tone for what Privatt describes as a charming little love story.

Gilbert got the idea for an Oriental setting when a Japanese sword that had been hanging on his wall fell down. That set the tone for the madcap work that was to come.

Gilbert and Sullivan’s work is often described as “Topsy-Turvy.” Film director Mike Leigh portrayed their world in his acclaimed 1999 film called, appropriately, Topsy Turvy. (If you missed the two “Gilbert Without Sullivan” plays, Leigh’s film can provide a potent primer.) The characters are ridiculous, and not subtly so. If names like “Yum-Yum” or “Nanki-Poo” don’t make that apparent, the witty dialogue does. Balancing the comedic elements can be tricky, as Privatt explains: “We need to create characters the audience cares about, while at the same time staying true to the text and the topsy-turvydom therein.”

Acting in The Mikado requires an understanding of these cross-purposes of comedy and dramatic depth. “The characters are very silly, and look ridiculous,” says Andria Helm, who plays the melodramatic Katisha for Thursday’s performance, “but each character is a sort of double-edged sword, and the performer needs to understand on what side the sword is falling.” The vocal department pored through scores of Gilbert and Sullivan before settling upon The Mikado. There are quite a few demands on the singers: the songs come one after another, and the chorus is unusually active and visible. What’s more, nearly 40 singers comprise the cast.

Mark Distenfass chose Gilbert’s Rosencrantz and Guildenstern-written during the same time period as The Mikado-and Realm of Joy, as the comedies that were performed last weekend.

With The Mikado and last weekend’s productions, Lawrence is promoting the appreciation of Gilbert and Sullivan to yet another generation of performers and audiences.