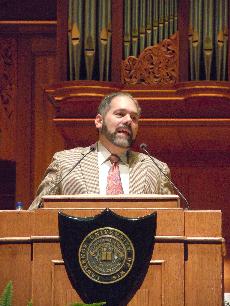 A densely packed Lawrence Memorial Chapel welcomed Ray Suarez to campus as the first guest speaker of the 2010-2011 convocation series Tuesday, Oct. 5. Suarez, a senior correspondent for “PBS NewsHour,” two-time author and award-winning journalist, delivered his convocation address, “The Browning of America,” on the impact of the increasingly diverse ethnic make-up of the United States.
Suarez opened his address by contextualizing the importance of this changing ethnic composition. He emphasized that the U.S. is part of a rapidly changing hemisphere and globe. Using examples of economic development in Brazil, Peru and Chile, Suarez demonstrated the rise of Latin America in the 21st century.
Within this context, Suarez then shifted the focus of his address to the way the United States will perceive itself in the future.
“We are – we have always been – a country very much of the New World,” Suarez asserted, “while still with a big part of our heads, a big chunk of our cultural imagination, stuck to the Old World. The next half-century is going to change that model, whether we like it or not.”
Suarez believes this change will result primarily from the current trends in immigration to the United States. He cited a range of demographic statistics, including that the U.S. has the fifth largest number of native Spanish speakers in the world.
Furthermore, Suarez highlighted, “We have [.] reached the percentage of foreign-born people in the population that we had a hundred years ago, in the early of the 20th century when we wrapped up fifty years of massive European migration.”
However, for the first time since the 18th century, the majority of children born in the United States don’t trace their ancestry back to Europe; instead, an increasing number of citizens trace their ancestry to Asia, Africa and Latin America. Suarez anticipates “[an] American future, in which a brown workforce pays in the benefits that will support an elderly white recipient pool.”
As we enter a “minority majority” in the upcoming decades, Suarez wonders whether American culture will be accommodating. Suarez referenced the emphasis on European history in the American curriculum of the preceding century. He then questioned, “Will ours be a culture that [.] makes room for new heroes?”
Suarez perceives the fears about the Latino population as reminiscent of American opposition to former immigration groups in the 19th century. “Any student of American history who has read the panicky projections about English mastery, unsuitability to democracy [and] inability to conform to American norms that were written about the Irish, the Italians [and] the Jews can easily dismiss the same kind of forecasting about Latin Americans,” contended Suarez.
However, Suarez notes, due to advances in technology, immigrant families can retain a closer connection to their home outside the United States. Suarez asserts that this generation of immigrants is “part of the conversation about how the United States will relate to India, China, Pakistan in the future.”
Suarez maintained, “The rise of homegrown civic muscle, to speak on behalf of the home country is not new. What is new is which countries we’re talking about.”
Throughout the remainder of his talk, Suarez emphasized the importance of educating new immigrant populations, in particular the Latino community. He stressed that in this time of declining incomes, “class mobility is getting harder, not easier.”
Suarez continued, “it’s a cherished part of America’s self concept that you can rise above your circumstances, that you can do better than your parents, that your children will do better than you.” Without this mobility, he claimed, there will be decreased assimilation.
Suarez acknowledged further concerns regarding this evolving face of America, such as the lack of border control and the impact on the workforce. However, Suarez concluded, “We can do this the easy way, or we can do it the hard way – we’ve done both in the past. And every time in our history where there have been high levels of immigration, there have been high levels of [.] anti-immigration sentiment.”
He stated, “America’s institutions don’t always get it right on the first try, but they do always get it right. Our great genius as a people is that we can both identify and then repair the problems of this coming future.”
Despite the serious nature of Suarez’s talk, his good rapport with the audience was evident. His departures from structured speech as he communicated freely and wittily with the audience were met with laughter.
Suarez left the stage to a long-lasting ovation. Following his talk, Suarez attended a luncheon with a group of students and then held a question and answer session in the Warch Campus Center.
Suarez is currently working on two books, one on the history of Latinos in the United States and the other on the future of the demographic trends in the United States. 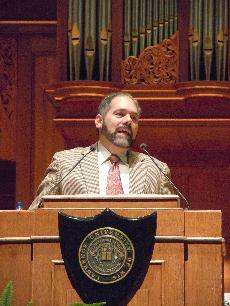